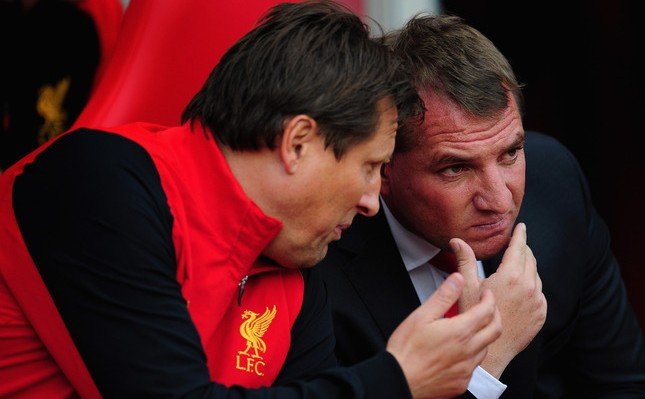 Europa League Match Preview
October 24, 2012October 24, 2012 Steven McMillan 1 Comment Anzhi Makhachkala, Brendan Rodgers, Europa League Group Stages, Guus Hiddink, Jamie Carragher, Joe Cole, Luis Suarez, Samed Yesil, Samuel Eto'o, Stewart Downing
With the goodwill from the 1-0 win against Reading last weekend put to rest, it’s time to shift gears back to everyone’s favorite second rate competition: the Europa League. Big spending Russian side Anzhi Makhachkala travel to Anfield on Thursday with Brendan Rodgers looking to put the 2-1 loss to Udinese behind them and find their way back into the group. Guus Hiddink’s side are joint top with the Italian side after seeing off Young Boys 2-0 in their last Europa League fixture. While it’s clear that Rodger’s priorities lie in the Premier League, finding the right balance in Europe can be the key to taking maximum points tomorrow and still having enough gas in the tank to roll over local rivals Everton at the weekend.

You would have expected to see a collection of youth and fringe players run out against Anzhi tomorrow if this was any other year. Now, it’s the youth players that are dominating the League fixtures and former first team players like Stewart Downing and Jordan Henderson who are having to prove their worth on the less than glamorous stages. These were also the kind of matches where Pepe Reina would enjoy a nice break, but with the Spaniard nursing a hamstring injury, second string ‘keeper Brad Jones will get the chance to carry on the smart performance that saw him keep a clean sheet against Reading at the weekend.

The Australian kept his composure in the face of some serious pressure and he’ll have to dig deep to do the same tomorrow; no disrespect to Reading, but they don’t have a striker quite like Samuel Eto’o in their side.  The veteran Cameroon international, who attracted the attention of Paris Saint-Germain during the summer, struck twice to see the Russian side over Young Boys during their last European foray and despite losing a step or two through the years, his eye for goal will have the hackles raised all across the Liverpool backline.

Guus Hiddink’s side remain top of the Russian Premier League after coming from a goal down to see off Spartak Moscow last weekend and have scored a consistent 2 goals each match; that will be food for thought for a Reds side that have failed time and again to convert dominance into goals. Anfield has hardly been the ‘bastion of invincibility’ it used to be — it’s late October and Brendan Rodgers only just enjoyed his first home win of the League campaign with 17 year old Raheem Sterling being the only player to find the net in a tenser than it needed to be 1-0 win over Reading.

Joe Cole, Stewart Downing, Jamie Carragher and Samed Yesil could all come into the side tomorrow — but, only one of those players makes makes me even the slightest bit excited. With Fabio Borini laid up for the next 3 months, the German youngster could find his way in the first team if Rodgers chooses to rest Luis Suarez ahead of the trip to Goodison this weekend. The Uruguayan striker missed a number of chances to give the Reds a cushion against the Royals with burn-out becoming a serious concern as the striker continues to feature regularly for both club and country.

The inclusion of Yesil could be the perfect opportunity to give Suarez a rest, and if it comes off, could be a perfect walk across the European balance beam for Brendan Rodgers. The Ulsterman is still finding his stride in the Liverpool dugout — juggling European competition with the importance of the league is a new experience for him and each match will certainly be a learning experience. Hopefully he doesn’t run out of those yellow legal pads before we navigate a way into the Knock-Out rounds.

Looking to fill in all that deafening silence in your life? Check out Anfield-FM — the authentic sound of Liverpool for LFC fans all over the world.