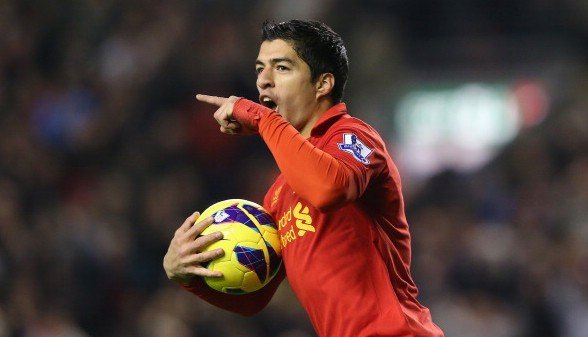 Analysis
November 5, 2012November 6, 2012 Steven McMillan 6 Comments Brendan Rodgers, Fabricio Coloccini, joe allen, Jonás Gutiérrez, Jonjo Shelvey, Jose Enrique, Luis Suarez, Raheem Sterling, Steven Taylor, Tim Kruhl, Tim Krul
Steven Gerrard would make his 600th appearance for Liverpool today, but it would be the new king of the impossible that would steal all the headlines. It’s been Luis Suarez all season long; the Uruguayan has now either assisted or scored 10 of the Reds 13 league goals this season. With Fabio Borini on the treatment table, the Captain stuttering and the kids — despite their valiant efforts — still needing more time in the oven, the heavy burden of finding the net has fallen squarely onto the talented toes of our number seven. He’s wowed the crowd in spectacular fashion before, and we all knew what he was capable of, but after his goal against Newcastleyesterday there’s no questions left to ask; this man can do anything.

Video by the impossibly talented @MostarLFC

Joe Allen looks tired. The Welshman has put in some long hours holding down the midfield since an injury to Lucas laid the Brazilian up and thrust the role of the ticking over, holding midfielder to the youngster. We’ve seen him make some mistakes in the past few weeks, and when he gave the ball away needlessly to Jonás Gutiérrez, it looked like another niggling little mistake in the center of the park and not at all like the catalyst for the equalizer.

The Argentine winger made a hash of his possession and played the ball too high for Papiss Cissé to latch onto. Jose Enrique has had a patchy season and though this match did little to change that, the pass he would play after finding himself with the ball at his feet would earn him some goodwill all around Anfield. Brendan Rodgers is loathe to see the ball played long, but even he would be smiling by the end of this.

A perfectly lofted pass found a streaking Luis Suarez at the top of the box. The Uruguayan timed his run well, splitting Fabricio Coloccini and Steven Taylor in the process, and only the Argentine would be able to track him into the area; though catching him and stopping him are two completely different things. In the split second the rest of us mere mortals had to process the passage of play, Suarez had already wheeled away in celebration.

Upon further review, that ball was hit too hard for him to sublimely control on his chest. Coloccini was too close — too strong — for little Luis to pull past. Newcastle ‘keeper Tim Kruhl had it covered and his slide was timed too well to have the ball deftly touched past him. If you have a look at it again, the angle wasn’t quite right for a tap into an empty net. All of that should have been true; that would have been the logical explanation, but it’s not at all what happened.

We may have missed out on two points after rewriting the story of our season word for word, but having Luis pot a goal of the season contender in front of the Kop will stir up belief that much more. That was one to remember.

6 thoughts on “Anatomy of a Miracle: Luis Suarez Goal vs Newcastle”