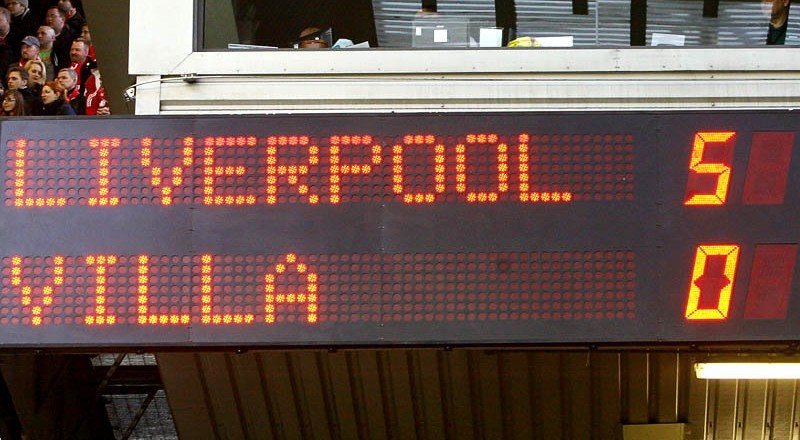 Match Preview Premier League
December 14, 2012 Steven McMillan 1 Comment Andreas Weimann, Aston Villa, Brendan Rodgers, Darren Bent, Glen Johnson, Joe Cole, Luis Suarez, Paul Lambert
We have to start winning at home; the Anfield isn’t a fortress anymore shtick is getting old, but until we start winning there on a regular basis, it remains as poignant as ever. If you can’t win in front of your own fans, where are you going to win?

Paul Lambert and his Aston Villa side are on Merseyside this Saturday after an electric 4-1 win against Norwich City that saw them through to the semi-finals of the Capital One Cup. Liverpool earned a smash and grab 3-2 win at Upton Park last weekend which leaves Brendan Rodgers’ side only four points out of a Champions League place; an enviable position they share with both West Ham and the Canaries. Instead of dancing around it for the next 300 words, let’s get to the point: we have to win.

Sure, our league position is improving, but the rest of the league doesn’t stop while we try to play catch up. As you look up the table, it’s a veritable pile up; only four points separate twelfth from fourth and with everyone looking to capitalize on everyone else’s mistakes, winning at Anfield is the only solution. We have to keep pace and tomorrow we’ll have a touch of that back.

Luis Suarez returns after missing out against West Ham through suspension and though he was only out for one match, he’ll be a welcome addition back into a side that had to field a midfielder as a striker last weekend. Though we missed his edge, we made out alright with goals from Glen Johnson and Joe Cole that saw us earn an undeserved three points on the road. Now that Robin van Persie and Michu have pushed ahead of Suarez in the race for the most goals in the Premier League, it’s time for the Uruguayan to get back to work; no better time to start than tomorrow and there’s hardly a better side to work over.

The Villains are heading to Anfield hovering, for the time being, just outside the relegation zone on goal difference. Paul Lambert has had a tough time since taking over at the Midlands club; though their league position is dire, they gave the Holte End faithful something to celebrate when they beat Norwich to progress to the semi-finals of the Capital One Cup. Austrian striker Andreas Weimann replaced an injured Darren Bent and scored a double off the bench to put the match out of reach of Lambert’s old side. Even though they found the net four times, winning at Anfield has always been a tough ask for Villa.

Liverpool have finally recorded back to back Premier League victories and if you sandwich progression in the Europa League between them, then you’ve got a good run of form; their first in almost a year. It’s been a quagmire of disappointing draws and less than acceptable finishes, but with the club on the up, Brendan Rodgers has insisted they won’t be resting on their laurels — and for good reason. With the festive fixture list coming up, we don’t have time to take a breather.

The Reds have five league encounters within the next three weeks and three of them are at home; starting with Aston Villa tomorrow. All five are winnable encounters and those at in front of our fans should pack an extra punch; if we win that is. We have a chance to bag nine crucial points and, as the season closes out, make a charge for the top four. No one is expecting Anfield to regain its fortress status overnight, but can we slap a tarp and some crazy glue over the leaks for now and close this year out with a bang?