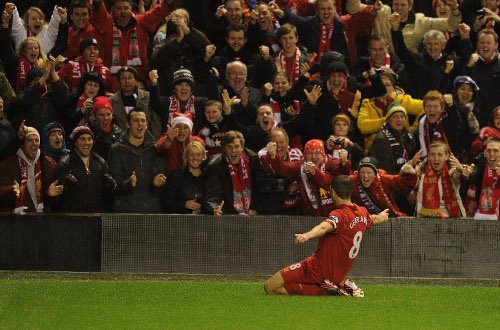 Match Reaction Premier League
December 22, 2012November 8, 2013 Steven McMillan 5 Comments 4-0 wins, Brede Hangeland, Brendan Rodgers, Dimitar Berbatov, Fulham, Hugo Rodallega, John Arne-Riise, Kieran Richardson, Luis Suarez, Mark Schwarzer, Martin Jol, Martin Skrtel, Pepe Reina, Steven Gerrard, Stewart Downing
Anfield is ready for the New Year; four unanswered goals send us into 8th place as Fulham are put to the sword. It was only a week ago that the Reds gave up the ghost in a 3-1 thrashing at the hands of Aston Villa, but Brendan Rodgers side were looking for a whipping boy and Martin Jol’s side looked more than happy to oblige.

Martin Skrtel would open the scoring with volley any striker would be proud of, Steven Gerrard rolled back the years with a bit of magic, Stewart Downing chalked up his first Premier League assist and goal before Suarez iced the cake deep into injury time with an emphatic finish. We’ve gone from talking about Champions League places to crashing back to Earth with the loss last weekend. Now, we’re stuck somewhere in between, but one thing is for certain: Fulham got smacked all around the park.

Martin Skrtel has the dubious honor of being the only player to score a winning goal for Fulham at Anfield; it was an own goal last season that saw the Cottagers win for the first time away to Liverpool. The visitors were on the back foot from the get go and it would be the Slovakian that would settle the early nerves.

A Steven Gerrard corner found Skrtel in the space and with Fulham captain Brede Hangeland slipping up on the slippery Anfield pitch, the center half had a clear shot on net. It all happened in a flash, but the half volley slowed down time; you saw the surprise in the eyes of Hangeland, the fear flash across the face of Schwarzer and every Kopite hop to their feet in celebration. With the go ahead goal sending them back to their seats, they wouldn’t be sitting for long as the Captain found himself on the board shortly after.

Steven Gerrard has been in for some criticism — some of it undue — with a handful of less than stellar performances putting blighting his season. Pepe Reina would keep the Reds ahead with an unorthodox save with his right foot from a Kieran Richardson strike in the 26th minute; the first time the visitors looked bothered trying to find their way back in. With Joe Allen on the bench, Shelvey would be pushed further forward with Gerrard and Lucas behind him. Although Jonjo would be playing higher up the pitch, it would be the Captain who’d find himself on the score sheet as Stewart Downing played creator.

It would be the misfit winger’s first Premier League assist since his move from Aston Villa last summer and it would be a sight to see; sitting at the top of the box, holding the ball while Gerrard darted through a confused Fulham back line. You expected him to play it wide, but the pass was almost as good as the run and it all ended with a finish on par with the buildup.

Even before they were two behind, the visitors looked off the pace. Martin Jol was in the technical area urging his team forward, screaming to close the ball down — it would fall on deaf ears. Richardson and Hughes were listless and the Reds were given a free run of the park and the Reds would add to their lead, through an unlikely goal scorer, just after the break.

Only six minutes after the re-start, Downing would score his first League goal for the Reds. The resurgent winger was giving for Liverpool defender John Arne-Riise nightmares all day. You would have expected a player with his experience to push Downing out wide as he ran with the ball into acres of space; instead, he allowed him to cut inside, yet again, and switch the ball onto his favored left foot to finish smartly past Schwarzer and put the Reds three goals to the good.

Former Manchester United striker Dimitar Berbatov, booed throughout, would try to pull a consolation goal back as the Reds turned the tempo down a notch, but with his shot scuffed into the ground, Reina was more than equal to it. Hugo Rodallega would rattle the frame of the goal from a free kick deep into injury time, but it would be Suarez that would have the final say when a short corner was played to Enrique.

The fullabck was straight back into the side after recovering from a niggling injury picked up against West Ham and with the three points already in the bag, the Spaniard would streak into the box and cut back for the Uruguayan, who had missed a number of chances to add to his already impressive tally earlier in the match, to tap in unchallenged and send the Anfield faithful home in the mood for the Christmas season.

It would be one way traffic throughout and with four goals in the bag, making too much of those that we missed — and there were tons of them — would feel a touch petty. Though it wouldn’t be without merit; we weren’t exactly lucky today. The visitors were dire, that goes without saying, but a youthful Reds team didn’t just take advantage of a aging Cottagers line-up; we were ruthless with them and that’s exactly the attitude we need rolling on into the New Year.