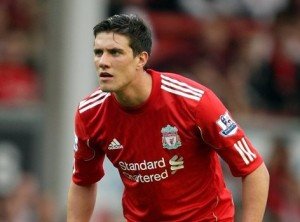 A day after the news of Jamie Carragher’s impending retirement, Martin Kelly has signed a long-term deal to remain at Anfield. The 22-year-old first joined Liverpool’s academy when he was just 7. He has made 54 appearances for the first team, but has been hampered by injuries.

“Being a Liverpool supporter myself, it’s brilliant to put the shirt on and I’m doing what I have loved doing since I was a kid. I’m over the moon.

“Today shows the faith that the club have in me and that the hard work I have put in since I was young has paid off. Hopefully I’ll put the injuries behind me. We have excellent medical staff here, who are going to work me and keep me on top of my injury. I’ll be coming back even stronger.”

Kelly has been out of action since September when he suffered a cruciate knee ligament injury while playing against Manchester United. He is a great talent and if the Liverpool medical staff can help him stay fit, he is sure to be a regular choice in the starting XI for years to come.