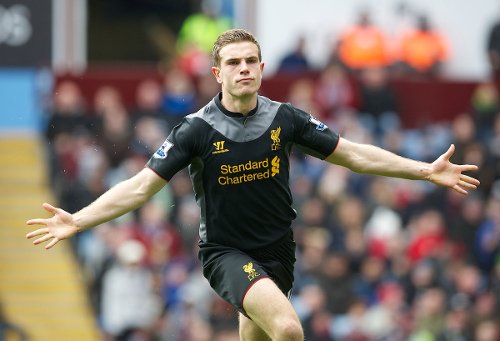 Match Reaction Premier League
April 1, 2013 Steven McMillan 1 Comment Aston Villa, Brad Guzan, Brendan Rodgers, Christian Benteke, Gabriel Agbonlahor, Jordan Henderson, Luis Suarez, Nathan Baker, Paul Lambert, Philippe Coutinho, Steven Gerrard
I’m sure I wasn’t the only one who was sweating it when Christian Benteke put Aston Villa ahead just past the half hour mark; Brendan Rodgers side haven’t been all too adept at turning things around when they concede first and with the hosts enjoying the run of play, a league double over Liverpool and a step away from the relegation zone seemed to be on the cards at Villa Park today.

Thankfully, the Holte End ended up busting even with an ace in the hole. Only two minutes after the re-start, a miraculous pass from Philippe Coutinho would find Jordan Henderson in acres of space and the midfielder would make no mistakes with a cool finish past Villa ‘keeper Brad Guzan. Only thirteen minutes later, Steven Gerrard would convert from the spot after a sloppy challenge from Nathan Baker caught Luis Suarez in the box. If Brendan Rodgers was looking for an immediate reaction after the shambolic display at Saint Mary’s, this was it — even if it didn’t quite go to plan all the time.

The opening exchanges were eerily reminiscent of the reverse fixture at Anfield in December with Liverpool controlling the run of play, but getting nowhere fast against a Villa back-line that was set up to defend deep. Paul Lambert wasn’t relying quite as much on the counter-attack in front of the hometown crowd and after weathering the opening storm, the hosts wrestled control back from the visitors as they looked for the opener. Matthew Lowton whipped in a cross that found Gabriel Agbonlahor in a perfect position, but Pepe Reina was equal to the England man’s shot. Though Agbonlahor couldn’t beat Reina himself, he played a key role in the breakthrough goal and it was little surprise who scored it.

Had it been Liverpool taking the lead, you’d expect Suarez to be the one on the score sheet and although the Uruguayan — who escaped retrospective action from FIFA for his dirty deeds midweek — had his chances, it would be Christian Benteke pulling the Villains ahead at the other end of the park. The towering Belgian has stamped his mark on the Midlands since his transfer deadline day move from K.R.C. Genk and when a picture perfect pass from Ashley Westwood was laid off by Agbonlahor, he was on hand to smash home past a diving Reina.

As the half wore on, it looked like Liverpool had run out of both gas and ideas. With Villa defending deep, time and space were at a premium and nothing seemed to be connecting; though not for a lack of trying.

Instead of rolling over and playing dead, there was a response and both Suarez and Gerrard would come close to drawing level, but Brad Guzan was on hand to preserve their lead — until just after the break that is.

A well placed clearance from Steven Gerrard would find Philippe Coutinho running up the wing and with half the Villa defense converging on the dangerous Brazilian, Jordan Henderson was given some space to run into. With Joe Allen out for the remainder of the season, the youngster has found himself in the team once again and if he continues to make runs like that one, he’ll be in it much more regularly; somehow, Coutinho threaded the ball through traffic to Henderson who would be free and clear to pick his spot with a perfect dink past Guzan.

Coutinho has now been involved in five goals in his last five games and he had a chance to put the Reds ahead when he timed his run perfectly to Luis Suarez’s through-ball, but he could only shoot agonizingly wide with the goal at his mercy. With Liverpool pressing hard, the next goal seemed a foregone conclusion and after Glen Johnson rattled the woodwork Luis Suarez’s cut-back at the byline was unceremoniously uninterrupted by Nathan Baker’s clumsy challenge. The Captain converted from the spot to give us the lead and not long after he would preserve it when his masterful headed clearance denied Benteke another double.

The Belgian would be thwarted by the offside flag well into injury time as a late surge had the hosts in the hunt for a share of the spoils, but it would be Brendan Rodgers side who’d keep their outside chances of a European spot alive while Villa were left to languish in the relegation zone after Wigan’s victory yesterday.

Three points at Villa Park haven’t exactly improved our predicament — we’re still in seventh place and three points behind Everton who hold a match in hand — but winning is better than not and those points could be valuable if luck chooses to shine down on us. Just because our fate is out of ours hands doesn’t mean we shouldn’t try to influence it in any way we can.

One thought on “Liverpool (2) Aston Villa (1): Midlands Comeback Keeps Reds in the Hunt”