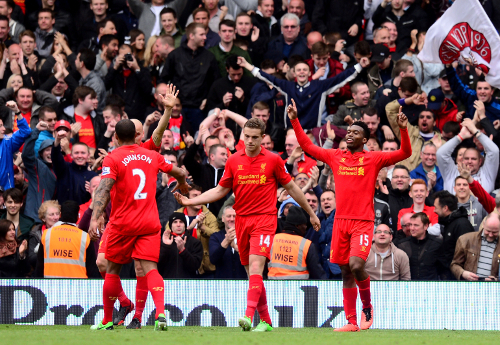 Match Reaction Premier League
May 13, 2013 Steven McMillan 2 Comments 3-1 wins, Andre Wisdom, Brendan Rodgers, Bryan Ruiz, Daniel Sturridge, Dimitar Berbatov, Fabio Borini, Fulham, Jose Enrique, Lucas Leiva, Mark Schwarzer, Martin Jol, Pepe Reina, Sebastián Coates
It all seemed to be going horribly wrong when Dimitar Berbatov headed in Sascha Riether’s cross at the far post to open the scoring. We’d failed to convert our chances in the opening exchanges and it was looking like this was to be our punishment; then Daniel Sturridge stepped in.

It took only 3 minutes for the striker to restore parity after a long ball from Andre Wisdom was gathered and rocketed past Mark Schwarzer and from then on, the hosts just couldn’t get back on track. A brace on the other side of the half made sure that Sturridge went home with the match ball, Liverpool left London with all three points and Fulham dropped to their fifth straight defeat in the league.

Sebastian Coates and Andre Wisdom were surprise inclusions as Brendan Rodgers switched to three at the back with Glen Johnson joining in the over-crowded midfield. The boss hasn’t played around with the formation too much since finding his niche a few months back and it was apparent why in the opening exchanges with the Reds looking a touch unsure of themselves. Still, that didn’t stop them from creating chances with both Sturridge and Jonjo Shelvey combining well on separate occasions with Philippe Coutinho to heap some pressure on their hosts.

The Cottagers looked shaky at the back as Liverpool poured forward, but it would be a defender that would play a key role in the first goal as an offside Sascha Riether overlapped an anonymous Damien Duff, sending in a cross for Dimitar Berbatov to head past a stranded Pepe Reina. With the opening goal secured, relief painted the face of Fulham boss Martin Jol; up to today, his side kept a perfect record when the Bulgarian finds the net.

That sense of comfort Jol was enjoying wouldn’t last for long as a long ball from Andre Wisdom was gathered by Daniel Sturridge. The striker has struggled to hold down a place in the starting lineup since his January move from Chelsea and with Luis Suarez serving a ten match ban for biting Branislav Ivanovic, the youngster has been given a chance to show the boss just what he can do — and with some fancy footwork, he did just that, leaving Aaron Hughes in his wake and rifling a shot past Mark Schwarzer.

By the time it was all done, Rodgers was quick to point out the impact Sturridge has had since arriving at Liverpool. “He can get goals in any game, he’s a wonderful talent. He’s 23 and I just felt he needed the platform to show what he can do” said the Ulsterman and though the remainder of the first half wouldn’t produce any more goals, we’d see more of that wonderful talent after the break. With a tactical shift back to our preferred 4-2-3-1 formation and Jose Enrique replacing Wisdom for the sake of balance, the Reds put a strangle-hold on proceedings — but not before some drama played itself out in our penalty box.

A rare foray forward for Fulham would find Bryan Ruiz in a dangerous area and when the Costa Rican’s cross struck the arm of Lucas Leiva, it looked like a sure penalty, though it quickly waved away by referee Mark Halsey. “The frustrating thing was that we should have had a couple of decisions for us and that didn’t happen” said Martin Jol after the game and when moments later Daniel Sturridge put away his second after a miscued shot from Philippe Coutinho landed favourably for the Englishman, it’d be hard to fault the Dutchman for feeling hard done by.

Sturridge would show his selfish streak as he looked for his hat-trick and Fabio Borini would cannon a shot off the woodwork before Fulham decided to make a match of it. Pepe Reina, a spectator for long swathes of the second half, would make two stunning saves to keep the advantage when first Berbatov was gifted the ball by Jordan Henderson and then stretching to keep out a goal bound Aaron Hughes header.

When it was all said and done, Sturridge probably should have scored six or seven, but he’d complete his hat-trick with aplomb five minutes from time, latching onto a trademark Coutinho through-ball to chip over the on-rushing Fulham ‘keeper. “We can score goals – we can go to any ground and win a football match” said Rodgers when asked about the progression of the side since he took over. Three points at the Cottage isn’t going to mean much when the points are tallied up next Sunday; still, winning is always better than losing and seeing Sturridge get his first — and surely not his last — hat-trick in Liverpool red was a good glimpse of what’s to come.

2 thoughts on “Liverpool (3) Fulham (1): Sturridge Burns the Cottage Down”