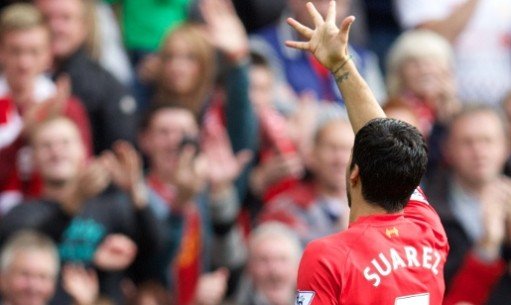 Despite the points and the general feeling of good cheer, with the quality of the opposition taken into account, the Reds turned in yet another troublingly poor second half display that a better side would have punished to a much more severe degree; by the same token, at this stage last season, after seven matches, we had accumulated only six points — today we sealed our 16th to ensure we stay in the race for a Champions League spot come May.

With Lucas Leiva suspended, Raheem Sterling was the only change to the side as the youngster filled in at wing-back and Jordan Henderson — who would put in an extremely good performance — slotted in for the Brazilian in the middle of the park. The England youngster came in for some early criticism as he struggled to find his feet during the opening exchanges while chances for Cameron Jerome and Steven Gerrard at opposite ends of the pitch went begging as both sides produced lively starts.

Aussie midfielder Mile Jedinak would smash a low free-kick against the Liverpool wall as the Eagles enjoyed a bit of early match pressure, but it wouldn’t be long before the hosts found their rhythm and the chances starting coming in quick succession. Luis Suarez would let a long pass from Martin Skrtel roll on to Jose Enrique and the Spaniard — who would switch off from time to time as proceedings wore on — would whip in a teasing cross that Victor Moses was unlucky not to control. If the Nigerians poor first touch was a gift for the visitors, it would be the only one they’d receive as Suarez opened his Anfield account for the year moments later.

Moses, playing once again in the number 10 role, would rake a pass out wide for the Uruguayan and with the patience of a saint, he’d wait for Enrique to appear on the overlap before moving the ball on for the Spaniard. A deft run to the center of the box found him alone in space, but a slip made it look like the chance had disappeared — before he expertly slotted home past Julián Speroni for his first home goal of the season. Not long after Daniel Sturridge would go close with a left footed shot that the Palace ‘keeper did well to parry away, but the English goal machine wouldn’t be denied as shortly after he cut in from out wide, danced past Damien Delaney and sent in a tight angled finish with the kind of grace only the best posses.

Palace boss Ian Holloway would be forced to switch up his tactics a bit and Mamadou Sakho would do well to keep Stuart O’Keefe from getting a shot away before the visitors had their best chances of the half come in quick succession. Jimmy Kébé had an effort cleared off the line from Kolo Toure and Simon Mignolet — untroubled for much of the half — had to be ready for the Malian after he got a touch on Cameron Jerome’s strong effort before Jason Puncheon’s follow up shot flew high over the bar.

Though the Eagles were looking good for a goal, they’d fall even further behind before the half was over when Steven Gerrard finished expertly from the spot after Raheem Sterling won an odd penalty; the stand-in wing-back would link up well with Suarez on the right side and with the youngster bearing down on goal, Dean Moxey would tug at his shirt to halt his run. Although contact appeared to be initiated outside the box, the linesman would flag for a penalty and referee Anthony Taylor would oblige by pointing to the spot.

It would be hard to think of a better way to start a match, but by the time the fulltime whistle was blown, there’d be a laundry list of ways we could have better ended it. Jose Campana and Dwight Gayle found their way onto the pitch at the break as Ian Holloway shuffled his deck and it would be the former Peterborough United striker that would find his name on the scoresheet halfway through so those who had backed Gayle as an anytime goalscorer with sites like coral.co.uk will have been rubbing their hands with glee.

With energy levels dropping and the ability to string together a series of even simple passes gone, the second half hangover was in full effect for Brendan Rodgers men — and it showed. Marouane Chamakh would have a tame header easily saved by Simon Mignolet, Puncheon’s deflected shot would take an odd bounce and almost loop over the Belgian’s head and then it happened. Set pieces are the devil; if Palace was going to score, there was little doubt it would be from a dead ball situation and when Raheem Sterling picked up a yellow card for a careless foul, Campana would whip in the resulting free kick that Gayle barely got his eyebrows on — but it was enough to nestle the ball in the bottom corner of the net and pull one back for the visitors.

Even that wouldn’t jump start the Reds and though the Eagles rarely threatened as time ticked away, they looked to be the better side — if only on account of how well Brendan Rodgers men looked in the first half compared to the second. Luis Suarez would be denied by the woodwork with only minutes left to play, but the paper that should have been applied to the cracks would have to come in the form of three points and a trip back to the top of the table instead of another goal for the South American.

Boo-hoo, right? It’s hardly doom and gloom around Anfield these days and though few Reds are getting carried away, we’re now winning games that last year or the year before we would have drawn and sneaking points in matches we would have lost. Grinding out results, scoring goals, an improving squad and the hunt for Champions League football — that’s what it’s all about. Poor second half displays, fading players and formational follies can be discussed at a later time; we’re top of the league and that’s nothing to moan about.

If you’re wondering what to do fill your time while you ignore World Cup qualifying, you can stop by here for a number of upcoming articles discussing the Reds fine start to the season as well as have a chat with us on Facebook or Twitter. Social media is kind of a drag, but so is watching England.