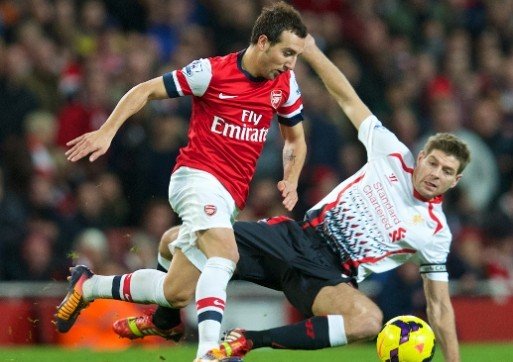 Arsenal midfielder Santi Cazorla scored from his own rebound after his powerful header struck the bar to give the hosts a first half lead and despite Brendan Rodgers making changes — formational, tactical and attacking — at the break, an absolute stunner from Welshman Aaron Ramsey punished Liverpool for allowing him a mere moment on the ball. Where the Gunners were quick on the ball and incisive with their passing, Liverpool were…well…whatever the exact opposite of all that is.

It looked like it was going to be one of those days straight off the hop. The inexperienced Jon Flanagan replaced Glen Johnson to make his first start since April 2012 after the England man was ruled out through illness and Coutinho, who was finally fit to return to action following shoulder surgery, started on the bench with a lack of match sharpness apparent when called upon at the break.

Tomas Rosicky would see the opening salvo turned away by Simon Mignolet before Jordan Henderson had Wojciech Szczesny at his mercy after hassling the ball away and going on a run from the half-way line only to scuff his shot wide. The midfielder is sure to come in for a ton of schtick in the coming days, but the far more experienced Steven Gerrard would have to take the blame for what was about to unfold.

The first goal in a match like this is always crucial and Arsenal at the Emirates score it more often than not. Against the run of play and quick as a flash, Bacary Sagna would go looking for Olivier Giroud with a probing cross into the Liverpool box after skipping away from Aly Cissokho, but the Frenchman wasn’t the one we had to worry about. Santi Cazorla ghosted in and with Flanagan stuck up the pitch and Gerrard unable — or unwilling — to track back, the Spaniard would smash a header against the woodwork. The split second sigh of relief was soon stifled when the Captain, rooted to the top of the box, failed to attack the rebound and Skrtel, seemingly mesmerized by the speed of it all, watched in amazement as Cazorla smashed the ball past Mignolet on the volley.

After all the pre-match optimism, it was like all the oxygen had just sucked out of the air; Jordan Henderson had the ball in the net after Daniel Sturridge rolled it across the face of goal for the midfielder to tap in, but Martin Atkinson ruled out what would have been the equalizer after adjudging that Luis Suarez’s free kick was taken too quickly after the Uruguayan had been fouled by Bacary Sagna.

Before the break, a pair of offside efforts saw Kolo Toure’s header well saved by Szczesny and a Sturridge effort go wide as the visitors showed some intent, while at the other end Cazorla and Ramsey both tested Mignolet as the Gunners struck time and again with purpose. Brendan Rodgers has taken flack for being unwavering with his formation and a lack of substitutes, but we’d see both switched up when Cissokho — on a yellow card and being outmatched in every category by Sagna — hauled off in favour of Coutinho and a switch to a more traditional 4-4-2 looking to plug the holes Arsene Wenger’s side so expertly exploited.

The Brazilian showed some expected signs of rust in the early minutes with a few wayward balls as he tried to bring Liverpool’s strike force back into the match. The link between midfield and attack — a major talking point for the Reds this season — seemed improve as Liverpool worked openings for both Suarez and Henderson, but with neither able to finish from close range, Aaron Ramsey seized on a mere second of space to score his 10th of the campaign and stunt any fightback the visitors may have been imagining.

Toure foreshadowed things to come when his lazy backpass was latched onto by Olivier Giroud and forgivingly chipped into the side-netting with Mignolet beat, but Ramsey wouldn’t show the same kind of compassion when he bulged the net only moments later. I’m not one to drool over the highly-rated Welshman, but you give credit when it’s due; Mesut Ozil, who was a tad bit anonymous for his lofty reputation, eluded the attentions of both Gerrard and Lucas to dink in a simple pass for Ramsey and the midfielder, in such fine form already, struck a picture perfect volley that tucked in just under the bar.

If Arsenal is going to win the title, they have to beat Liverpool at home and they did it with aplomb. Two goals down and time ticking away, Liverpool had no choice but to throw caution to the wind, but the Gunners — and more specifically Szczesny — were there at every turn. Suarez had a number of half-chances go begging and Sturridge, looking increasing frustrated by the events of the day, headed Henderson’s cross over the bar as the Reds went in search of a consolation goal that never did materialize.

If a trip to the Emirates was the acid test, then Brendan Rodgers men got burned by a side that showed their early season form wasn’t just on account of a favorable fixture list. We knew that hammering West Brom at Anfield was a very different monster than trying to put one over the Gunners away from home and if you had illusions to the contrary, maybe you were getting caught up in the hype instead of keeping things in perspective.

We’re in third place at the beginning of November — a position no one thought we’d be in when the season kicked off against Stoke. Losing to Arsenal is maddening given our recent run of form, but it’s not surprising to see the Reds drop points to a superior side. There’s work to be done, but that doesn’t discount the work we’ve already put in.

Got something to say? Think I’ve got it wrong? Get your finger off the button and say it in the comments — or find us on Facebook or Twitter. We’ll be the ones avoiding the haters and soapbox prophets.

One thought on “Liverpool (0) Arsenal (2): Perspective Needed After Gunners Setback”