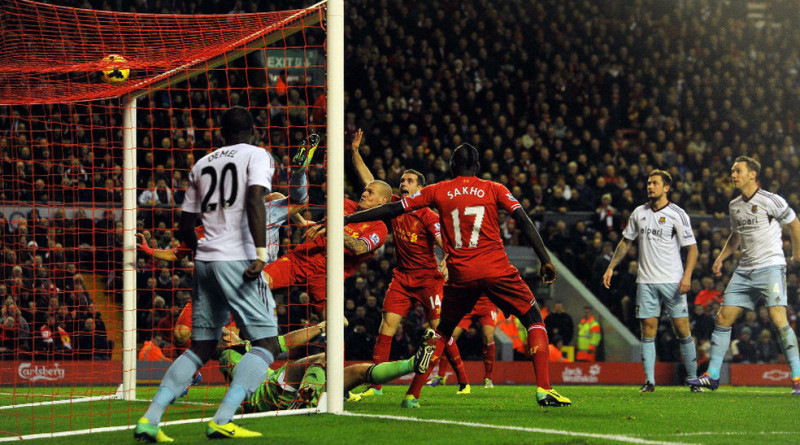 After signing Mamadou Sakho from mega-rich French side Paris St. Germain on transfer deadline day, the 23-year old has been in and out of the side and has occupied a few different roles in a few different formations. With Liverpool vice-Captain Daniel Agger returning to the squad in place of Kolo Toure following the Reds complete and utter capitulation against Hull City last Sunday, a resounding 5-1 win over Norwich City almost ensured that the Dane would keep his spot in the side – until illness struck. “Daniel felt sick this morning when we arrived at the training ground. But a more than capable replacement came in, who I thought was excellent” said Brendan Rodgers; by this point you know exactly who that replacement was.

In a week filled with responses to Liverpool’s recent troubles, Mamadou Sakho got his say as well; the French defender has been out of the side since the most recent international break, but over the 90 minutes he played on Saturday, he barely put a foot wrong as Liverpool routed West Ham United by a 4-1 score line.

As expected, the 23-year old spent 33.3% of his time in the middle of the field in the space between our own box and the half way line, but he also helped out quite a bit on the left as the Reds held a high-line with the defender spending 20.69% of his time left of the center circle. There were long swathes of the match where the Hammers offered little to no attacking impetus, but when they did, Sakho always seemed to be in the right place at the right time – literally.

We saw it in his earlier appearances and we saw it again Saturday; the man knows how to read the game. The big defender made an impressive 3 interceptions during the match, won 2/3 of his tackles, successfully cleared the ball in each of his 13 attempts, and against a very physical West Ham United side, bagged 50% of his headed duels. The Reds enjoyed 59% of the ball during the match and Sakho can certainly say he did his part.

Retaining the ball is of massive importance under Brendan Rodgers and the Frenchman did not disappoint; not only did he not give up a single foul throughout the entire match, he also completed 97% of his 35 attempted passes with a 19m average pass length – even creating 1 chance for his teammates. The icing on the cake though had to be his first goal for Liverpool; he took 2 shots during the match, but the one that beat Jussi Jääskeläinen is the only one that matters. It was a bit scrappy, but no one, least of all him, is complaining…

With the retirement of Liverpool legend Jamie Carragher, there was a gaping hole in the heart of the Reds defence – something the Liverpool hierarchy addressed over the summer. If former Manchester City defender Kolo Toure represented experience and Sporting CP youngster Tiago Ilori was the future, then Sakho was the right now. At least, that’s what we thought.

“The idea was to bring him in to develop but Sakho came in and challenged (for the first team),” said Rodgers. “There’s no real change to that. He came in at a time when we went to a back three and did reasonably well. He’s now working very hard to come back into the starting lineup” he continued, and with Agger out on Saturday, the Frenchman did make his return to the starting eleven and scored a goal in the process.

We saw the “Parisian Mountain” bag himself a brace in France’s victory over the Ukraine in the second of their World Cup play-off tie and against West Ham United he found the net for the first time in a Red shirt. “I thought Sakho looked strong and aggressive and he looked like he really wanted to take his opportunity. He did that. I thought he and Skrtel were both excellent” enthused the Reds boss. But was it a good enough performance to force his way into the side that’ll face Tottenham this weekend?

Earlier in the week it sounded like the Northern Irishman wasn’t quite so sure. “He’s a good player, an international and if he’s working well enough in training and the team is not doing so well, it could open up the door for him.” While Liverpool continue to look for balance in the middle, we heard an enthusiastic knocking on Saturday – a sign that Rodgers may want to keep the door unlocked.

Keep up to date with all the goings-on at Paisley Gates by following us Twitter and liking us on Facebook. We’ve got a big transfer window coming up and you don’t want to be out of the loop, do you?