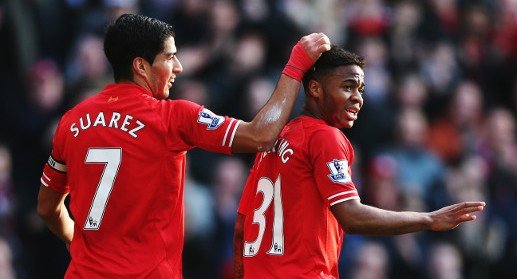 It was starting to look like Raheem Sterling wasn’t going to live up to the hype; personal problems off the pitch and bad body language on it, the Liverpool winger was looking like a remarkable talent wasted at the beginning of the season.

Brendan Rodgers obviously recognized this, and at the end of September, called on the then 18-year to sort it out. “He needs to stabilise his life, understand the remarkable opportunity he has at one of the biggest clubs in the world and focus everything on his career” said the Reds boss. “Once he does that and he is clear in his mind, he has no distraction and we can get to the level of performance of the first four or five months of last year.” Based on his last four matches, it would appear that he’s found — and pardon the pun — sterling clarity.

Luis Suarez may be getting all the headlines, but Raheem Sterling is quietly reaping the benefits of the Uruguayan’s immense form. For the second match running, Suarez provided the fuel for the youngsters fire with an unselfish pass across the face of the net, putting the 1 goal Sterling conjured up on a silver platter.

The striker may have been the creator, but Raheem certainly held his own going forward with 67% of his shots finding the target — a 34% improvement on a dismal team average of 33%. Much like the weekend before, 2 of the sides many chances came out of his ingenuity with the youngster playing 2 key passes to keep the Reds on the offensive.

If there’s been any criticism of the youngster that has been due, it’s been his passing game. The fact that Rodgers wants the side to retain possession has been beaten to death, but it’s no less true. Last weekend, Raheem completed on 69% of his passes. Yesterday against Cardiff City, we saw a marginal improvement up to a more respectable 77% complete with an average pass length of 15m. Aggregated over the entire season thus far, he’s completed 84% of his passes; a decent tally considering he’s still learning.

Even though he didn’t register the best pass accuracy, he did contribute to the possession game in other ways by making 1 interception and getting back to help out on the defensive side of things. Sterling won 42% of his duels including 6/9 take-ons, but only 1/5 attempted tackles — with of those failed tackles earning him a yellow card. Well, you can’t win ’em all…

Three goals and an assist in his last four appearances has put the youngster very much back in the frame for a regular first team place. With the likes of Steven Gerrard and Daniel Sturridge on the sidelines, Rodgers called on the squad to stand up and be counted; Raheem has certainly answered that call.

Following the 4-1 win over West Ham United, the Liverpool boss praised the youngsters work rate and ingenuity on the pitch. “His pace in pressing is important,” Rodgers said. “He can stretch teams and that can always open up the space. You can see his confidence returning and, even though he hasn’t scored, he gave the team an extra dimension.” His confidence, it would seem, has now made an appearance.

With the youngster starting to once again look like the player that set the Premier League ablaze last season, the Reds are once again reaping the rewards of bringing through their own talent and sit, if only briefly, on the top of the table following yesterdays 3-1 win over Cardiff City. “There were parts of the game where I loved watching the team,” the Liverpool manager enthused. “I love the fluency and some of the cleverness and just seeing gifted players work hard in a system is great to watch.”

2 thoughts on “Raheem Sterling vs Cardiff City: Video and Stats”