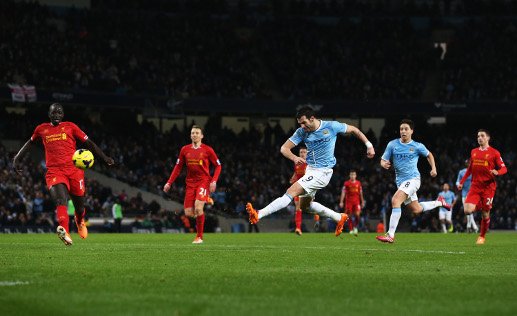 The Citizens have been nothing short of dominant at the Etihad Stadium this year — racking up full points in all nine of their home matches — and trouncing the likes of Manchester United, Tottenham Hotspur and Arsenal in the process. Not Liverpool though; Brendan Rodgers side gave a good account of themselves and when Philippe Coutinho sent the travelling Kop into dreamland with the opener, the belief that we could take full points where so many had failed before was on display for the world to see.

Vincent Kompany pulled one back and Alvaro Negredo scored the eventual winner as halftime beckoned, but in the second half, much as in the first, Liverpool always looked dangerous and continually pegged the hosts back with a tight pressing game and a number of good chances. In the end, it was inexperience and bad luck that saw us drop off the top spot — but still stay right in the mixer — with Chelsea about to provide another stern test at the weekend.

Despite the defeat, there were a number of positives, and talking points, to draw on from yesterday’s match — chief among them being what’s certainly a weaker overall squad being able to hang with the meticulously assembled and vastly overpriced mega-stars of Manchester City.

Brendan Rodgers doesn’t get the credit he deserves; I’m sure he soon will, but for the time being he’s vastly underrated. The balance of the team and the high-pressure tactics were superb. Joe Allen kept Yaya Toure quiet, Mamadou Sakho was everywhere, Jordan Henderson showed why he’s such an efficient engine and the front three of Luis Suarez, Raheem Sterling and Philippe Coutinho showed why the ability to interchange positions is so vital in the modern game. Sterling, in particular, really stood out.

In the first half alone the youngster was twice effectively able to exploit the space created by the runs and interplay of the front three; the first time he was incorrect ruled offside and the second lead to Coutinho potting the opening goal of the match. In the second half, he could have done better to stab home Suarez’s perfect low cross, but the mere fact that he was able to not only time his run to meet the ball, but that he knew the space to move into shows that he’s back on a serious upswing. To be fair, it should have been Glen Johnson that drew the sides’ level, but the more experienced England international couldn’t get the ball out from under his feet soon enough to slot home after finding himself alone in the Manchester City box.

The fullback wasn’t quite up to snuff yesterday either going forward on the back foot. He’s an attacking fullback and based on that alone he’s prone to being caught up-field when attacks break down and the opposition is able to quickly counter-attack; when you roll the dice, sometimes you pay the price and Simon Mignolet was the one getting out his checkbook for Negredo’s eventual winner. Criticism has been leveled at the Belgian for flapping at the Spaniards chip-cum-knuckleball of a shot, but had he not scored, it would have been nothing short of embarrassing. A striker of his caliber in that much space and with a good amount of time to steady himself for a shot should always find the target – did Simon make a mistake by reading the situation wrong? Sure, he did. In most other situations would a striker shoot across the goalkeeper into the largest gap between him and the most? Almost certainly; we got carved open on a quick counter-attack by the only team in the league that has scored more goals than us — hardly Mignolet’s fault.

To be fair, Negredo’s goal should have only been the leveler — and I’m not talking about the offside decision on Raheem Sterling. The host’s first goal never should have happened; our fragility at set-pieces is maddening most days, but it was infuriating yesterday and Martin Skrtel is doing nothing to fix that. Playing the man instead of the ball isn’t a good tactic and we saw it again yesterday when he tried to take the shirt off Vincent Kompany instead of focusing on heading away David Silva’s corner. The media frenzy being whipped up for shirt pulling is sure to amount in a penalty in the very near future and I’d rather not see it come at Stamford Bridge on Sunday.

What’d you think? Points dropped or a good showing on the part of the Reds? Let us know in the comments or find us on Facebook or Twitter.