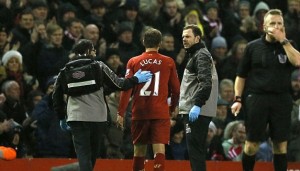 Yesterday, Lucas proved once again how important he is to Liverpool, but after finding his way onto the pitch in place of compatriot Philippe Coutinho at halftime during the Reds 2-2 draw with Aston Villa at Anfield, a knock to the knee saw the Brazilian leave the field in some discomfort.

Liverpool boss Brendan Rodgers named a rather adventurous line-up for the Villains visit that relegated the defensive minded midfielder to the bench. With his dreams of an offensive masterclass in shambles after two early goals for the visitors set Paul Lamberts side on course for another victory at Anfield, the Brazilian was called upon to regain control of the middle of the park — something he did quite comfortably.

Steven Gerrard pulled the hosts level from the spot after Daniel Sturridge shorten the gap on the stroke of halftime, but with Lucas picking up a knock in the 66th minute, the momentum left the pitch along with the midfielder who’s now a concern for this weekends FA Cup meeting with Bournemouth and the Merseyside Derby three days later.

“He clashed knees with an opponent, so we’ll just see how he is,” said Brendan Rodgers in his post match interview. “He just felt a little click in his knee. Hopefully it’s not too serious. We’ll not know for the next 24 to 48 hours.”

The Reds have been cursed with injuries this term with a number of defensive players still on the sidelines. While the Liverpool faithful have their fingers crossed that a long layoff isn’t in the Brazilian’s future, at least he’ll be in good company should he be ruled out for an extended period of time.