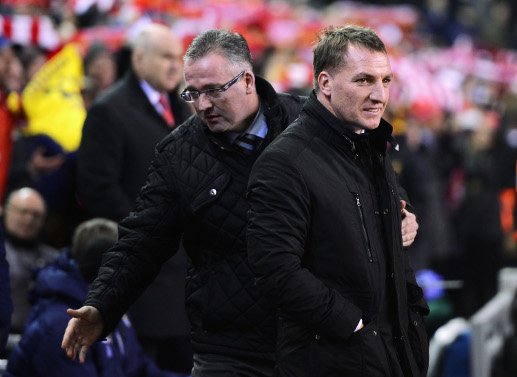 Editorial Feature
January 19, 2014January 19, 2014 Steven McMillan 0 Comments Andreas Weimann, Aston Villa, Brendan Rodgers, Christian Benteke, Daniel Sturridge, liverpool fc, Lucas, Paul Lambert, post-match interview, Steven Gerrard, video
I think Brendan Rodgers will move back to the defacto position of dismissing any talk of a title charge the next time he’s asked about it. The Reds manager remained bullish when asked whether his side would remain in the conversation for the Premier League crown in the buildup to the meeting with Aston Villa yesterday, but a 2-2 draw put a serious dent in their forward momentum.

Where the Anfield outfit had five goals in their tank against Stoke City last weekend, there was no barrage of awe aspiring attacks this time out with a very organized Villa side able to hang on for a well earned point on Merseyside. Rodgers, obviously unamused, didn’t sound all too surprised in his post-match press conference. “I don’t think we were quite at our best today, across the team. Normally we’re a team that, when we have our tails up, we’re one of the best about.” Yesterday, we were anything but.

With Lucas out of the side and the Northern Irishman naming a very adventurous, attacking side, Paul Lambert’s side were easily able to expose our weaknesses with the midfield continually passed over and acres of space on the flanks. Early goals from Andreas Weimann and Christian Benteke saw the Reds pegged back until Sturridge pulled a goal back on the stroke of halftime with the hosts only attacking play of note over the opening 45-minutes.

“Tactically, we had our work cut out – we had to change it,” Rodgers said when asked about the change in focus following the halftime whistle. “I thought we needed to get another body back in behind the game to give us that superiority and make it three versus two.”

The defense minded Brazilian replace his compatriot Philippe Coutinho at the break as Rodgers looked to repair the damage his line-up caused and the change in tactics did just that. Steven Gerrard converted from the spot to pull his side level less than 10 minutes after the re-start, but the Reds were unable to find the breakthrough with Villa holding firm.

“But you’ve got to give Aston Villa credit, they played well” said Rodgers who was quick to point out that one point is better than none. “Without playing well, and being 2-0 down, we showed immense character, spirit and resilience to get a point, and we’re disappointed not to win it in the end.”

The single point picked up yesterday closed the gap between Liverpool and cross town rivals Everton to two points and a win tomorrow for the Toffees could see them leapfrog the Reds into fourth place. Despite the possibility of dropping out of a Champions League spot hanging over our heads, the improvement this team has made since last year continues to be apparent on a weekly basis.

“But have a look at the last week” enthused the manager. “Stoke away and Aston Villa at home. In the same games last season, we got no points from them. This time we’ve taken four out of the six.” He’s not wrong; a 3-1 reversal at the hands of Paul Lamberts side opened in a very similar fashion to yesterday’s draw with the main difference being that Liverpool were unable to claw their way back into the game.

“We weren’t great, but it was going to be very important we got something from the game. We’ve shown yet again great character to come back” said Rodgers and all of a sudden a point doesn’t look so bad, does it?

Well, I guess that sunny disposition all depends on whether or not Everton lose tomorrow.