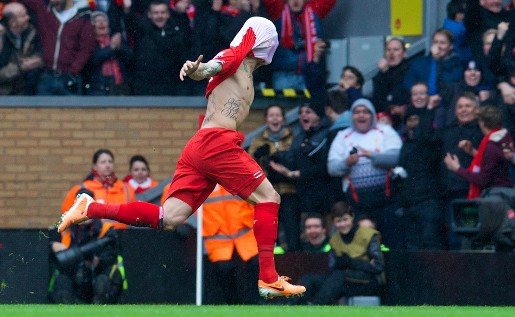 The running narrative in the build up to this top of the table meeting was whether the Gunners could cement their title credentials and avoid the prophesied, predictable implosion pundits around the world have been trumpeting since the beginning of the season. In retrospect, the more poignant question was if Brendan Rodgers side could bounce back from the disappointing 1-1 draw with West Bromwich Albion and dominate Arsenal the same way they did Everton last week. The only answer Reds around the world wanted to hear, and which came emphatically within the first 20 minutes, was a resounding yes.

Before an entire minute had been played, the hosts were already ahead; Per Mertesacker pulled down Luis Suarez for a freekick in the opening exchanges, and quick as a flash, Martin Skrtel got on the end of Steven Gerrard’s well worked delivery to finish with his thigh past a flat-footed Wojciech Szczesny.

The big Slovakian was on hand minutes later to deny Nacho Monreal an equalizer after Simon Mignolet’s clearance rebounded off of Jon Flanagan, but the real excitement for the 29-year old came at the other end of the pitch when he doubled up the score in the 10th minute. You’d have to be clairvoyant to have a punt on Skrtel scoring two against the Gunners, but with a header even the best center forwards would be happy to claim as their own, he did just that.

Shellshocked and in utter disarray, there’d be more misery for the visitors as the Reds rolled on. You have to reach all the way back to March 2007 to find the last time Liverpool took full points at Anfield against Arsenal, though you’d never know it with today’s performance. Daniel Sturridge had a rare blip in front of goal after good work from Philippe Coutinho and Luis Suarez saw the England man shoot wide when one-on-one with Szczesny and the Uruguayan would have a pop of his own, rattling the cross-bar with an immense volley from the edge of the area, but it would be Raheem Sterling that would find the net next, turning in a low Suarez cross after Jordan Henderson won the ball back in midfield.

Keeping in mind that we haven’t hit the 20-minute mark quite yet, Sturridge atoned for his previous mistake by adding Liverpool’s fourth goal in typically cool fashion after Coutinho’s perfectly weighted through ball sent the striker running clear of Laurent Koscielny — who had so much made of his impressive record with defensive partner Mertersacker in the build up to this meeting that both of them are sure to cringe in the future at the mere mention of it.

By halftime, there was surely no way back for Arsene Wenger’s side. The Gunners started an important run of matches with this trip to Merseyside the jumping off point for meetings with Manchester United, an FA Cup clash with Liverpool at the Emirates, and the first leg of their Champions League tie with holders Bayern Munich on the horizon. When Sterling struck his second within ten minutes of the re-start — this time picking up his own rebound after superbly controlling a lofted ball from former Gunner Kolo Toure — you had to wonder what was going through Wenger’s head.

A triple substitution on the hour mark came on the back of Suarez almost beating Szczesny with a sneaky freekick and the visitors would finally find some joy in the 69th minute when Arteta grabbed a consolation from the spot after Gerrard — immense in the deep role today — up-ended Alex Oxlade-Chamberlain in the area.

The Spaniard came close to adding a second only moments later, but Mignolet saw his low-free kick through the crowd and got down low to ensure the rout remained on. In a rare bit of luxury, Rodgers was able to give a little extra rest to Gerrard, Suarez and Sturridge with both the result, and his place in the Anfield history books, more than assured.

Today was all about keeping pace and Liverpool did that with a jet-pack propelling them forward. Rodgers may have ruled his side out of the title race, but if he’s able to keep the Reds playing the way they are, he’ll surely be navigating his first season of Champions League football next year, and maybe — just maybe — talking up his sides title credentials instead of playing them down.

Was that a better performance than against Everton? Or was beating the Gunners head and shoulders better than trouncing the Toffees? Let us know in the comments — we’d love to hear what you think.

6 thoughts on “Liverpool (5) Arsenal (1): Just Another Day in Dreamland”