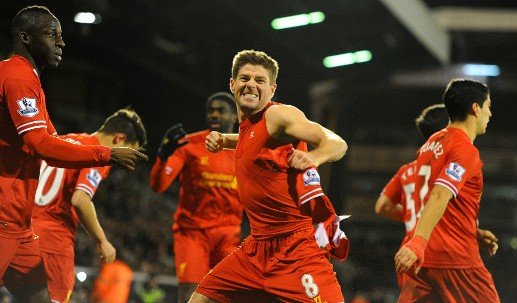 A Kolo Toure own goal less than ten minutes in set the tone of what was a nervy visit to London for Brendan Rodgers men. Daniel Sturridge pulled the Reds level just before the break after latching on to a delightful pass from Steven Gerrard, but former Manchester United winger Kieran Richardson, who forced the own goal with cross that took a bobble on the bumpy pitch, was on hand to capitalize after Martin Skrtel’s attempted clearance went awry. Philippe Coutinho pulled the visitors level for the second time with a well struck drive before Steven Gerrard secured the points – and Brendan Rodgers blushes — in dramatic fashion as the clock rolled onto the 90-minute mark.

Liverpool’s away day blues have been well documented, and it looked like par for the course when Toure’s mistake gave Fulham an early lead. On-loan Tottenham midfielder Lewis Holtby was proving to be a handful in the early exchanges, and though his ball to Richardson looked dangerous, the delivery from the former United man wasn’t the best — but it didn’t have to be. The pitch at Craven Cottage isn’t exactly the pristine carpet of grass that Anfield is, and with the ball skipping across the pitch, Toure’s attempted clearance took a wicked slice to wrong foot Simon Mignolet and hand the Cottagers an unlikely lead.

Darren Bent wasted a fantastic opportunity to put the hosts two to the good when he spurned Richardson’s cross and he’d be kicking himself less than ten minutes later when Sturridge – who just can’t stop scoring – drew the Reds level. Liverpool looked a shadow of the side that demolished the Gunners at the weekend, but Gerrard still has an eye for a pass and the skipper found his England teammate with an off-balance, off-kilter pass with the outside of his boot that was better than most you’d see on any YouTube highlight reel. Sturridge never looked like missing that chance and he finished with aplomb despite Fulham ‘keeper Maarten Stekelenburg doing well to cut down the angle.

Level at the break, you’d expect Brendan Rodgers side of running away with it in the second period of play, but it’d be Fulham who’d find themselves carrying another lead 18 minutes after the restart. The Anfield outfit were absolutely dominate throughout, enjoying 69% of the possession when all was said and done, but Richardson’s go-ahead goal was a testament to the fact that controlling proceedings doesn’t always win you matches.

Chances for both Suarez and Sturridge went begging for the visitors early in the second half – most notably when the Uruguayan’s well struck effort rattled the base of the woodwork – and they’d be punished for their uncharacteristic wastefulness in front of the net when Rene Meulensteen’s side gave the Cottage something to cheer about. It was another bit of shambolic defending from the visitors as Fulham surged forward, and with Skrtel unable to fully clear a telling cross, Richardson was on hand to make the Slovakian pay, calmly finishing past Mignolet to restore his sides lead.

Liverpool, having punished Arsenal so completely at the weekend, weren’t about to give up and Coutinho restored parity with his third goal of the season when he skipped his way through, around and loose of a host of Cottagers defenders before sending a curling effort past Stekelenburg and into the bottom corner of the net.

An accidental collision between the Fulham ‘keeper and Suarez would see the Dutchman come out worse for wear and reserve shot-stopper David Stockdale called upon before the 90-minutes were up. With the momentum in their corner, the visitors weren’t about to give up and Fulham defended with their lives in an attempt to hang on to yet another vital point – but it wasn’t to be. Debutant Joao Teixeira had a shot sail just over, Coutinho sent another one wide and Sturridge was a step too late, but Steven Gerrard got it just right when he beat Stockdale from the spot after Sascha Riether’s late challenge on Sturridge set the Liverpool skipper up with the kind of golden opportunity he never misses from.

It was ugly as sin, but we’ll take any and all points we can get. Tottenham downing Newcastle earlier in the night meant that three-points were required to keep the gap between the two sides at an acceptable distance and the Reds did just that. Sometimes, a no more, no less performance is all that’s needed. They can’t all be 5-1 wins over Arsenal can they? Every once and a while you have to step up and put in a real shift.

That was close, wasn’t it? Let us know what you thought in the comments. I’m still trying to reconcile the fact that we won.

6 thoughts on “Liverpool (3) Fulham (2): There’s Something About Almost Losing”