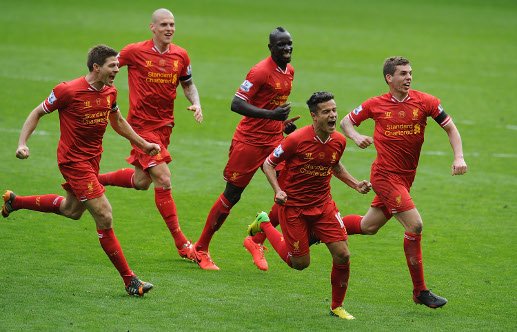 The Reds raced to a two goal lead within 20-minutes with memories of the routs of Arsenal, Everton and Tottenham cropping up all around the stadium. A much better second half from the visitors saw Manuel Pellegrini’s side draw level after David Silva pulled one back and fullback Glen Johnson’s own goal restored parity. City looked the more likely to go on and claim a vital three-points before the roar of the Kop — and a mistake from Vincent Kompany — saw Philippe Coutinho finish coolly beyond a diving Joe Hart.

With an impeccably observed minute’s silence for the 25th Anniversary of the Hillsborough Stadium Disaster adding an extra layer of motivation, the home side raced to a deserved lead within the opening ten minutes when Luis Suarez shrugged off a defender to play in Raheem Sterling with a perfectly weighted pass. The youngster, who has been enjoying his breakout season, wrong footed a pair of defenders and Joe Hart before slotting home the opening salvo.

If going behind wasn’t enough of a blow for the visitors, then losing Yaya Toure to injury not long after only compounded their problems. The speed at which Liverpool hit on the counter-attack was an impressive feat in itself, but the way they carved City open with their trademark flowing passes was a thing to behold and they were unlucky not to go two behind through former striker Daniel Sturridge when the Premier League’s second highest scoring shot wide from eight yards.

The second would come not far after that though when, after seeing Hart save his powerful header, Reds captain Steven Gerrard whipped in the resulting corner and watched on in delight as Martin Skrtel glanced it past the helpless City ‘keeper. Just when you expected Brendan Rodgers side to go into cruise-control, the visitors began to show signs of life and Mamadou Sakho, prefered to Daniel Agger for the crunch clash, was lucky to get away with a less than tidy challenge on Edin Dzeko in the area and Suarez, booked early for a rash challenge of his own, failed to see another yellow card despite his obvious simulation when brushed by Martin Demichelis.

The introduction of James Milner at the half-time break stirred Pellegrini’s side to life and the home side saw their lead crumble in quick order when the winger crossed for David Silva to lash home. The Spaniard was instrumental in the second when his cross took a deflection off Glen Johnson and Simon Mignolet to hand the Englishman his first own-goal of the campaign.

The introduction of Sergio Aguero for Dzeko saw the visitors push for the win and they nearly had the ball in the net once again as the Argentine’s pass skipped just shy of Silva’s toe with the net at his mercy. With Sturridge the next to pull up, Rodgers threw Joe Allen into the fray and the Welshman’s influence was instantly felt as the Reds once again started to enjoy the kind of possession that saw them race to a first half lead.

Despite the improvement in their game, a mistake from Kompany — who was injured in training yesterday and was a late decision to even feature — sliced a clearance into the path of Philippe Coutinho. The Brazilian showed the same kind of composure that saw him score against Tottenham Hotspur in the Reds last Anfield outing to blast a perfectly placed shot past Hart and set-up a frantic finish.

Jordan Henderson received a straight red-card and Martin Skrtel appeared to punch the ball away as an entire crowd jumped for the ball, but Rodgers team hung on the claim their tenth win on the bounce and maintain their place at the summit of the Premier League table. The sheer noise inside of Anfield reflected the emotions of the players on the pitch with a teary eyed Steven Gerrard the most poignant picture of what has been an amazing journey.

Nothing, it has to be said, has been won quite yet, but Liverpool remain masters of the own destinies. Although in a lot of ways this felt like a title decider, it’s just another stop along the way. Punters and pundits alike will discuss Chelsea’s visit in two-weeks time as the next milestone match, but next weekend’s trip to Norwich City is what’s important now. One match at a time, four more times.