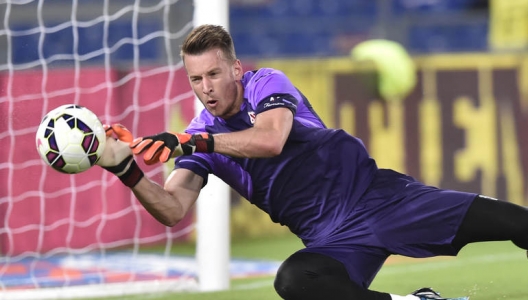 Although Liverpool boss Brendan Rodgers has played down the clubs ambitions for the January transfer window, the Reds could be spurred into making a move for ACF Fiorentina ‘keeper Norberto Neto with the club confirming that the Brazilian won’t be renewing his contract.

Liverpool have been linked with a veritable who’s who of goalkeepers as the club looks to replace the struggling Simon Mignolet, though there aren’t too many of them that would be ready to make a move in the particularly turbulent — and overly expensive — winter window. That, it now seems, isn’t the case with Neto though as the Viola will likely look to cash in on the promising shot-stopper before he’s able to leave them  a free in the summer. That only makes sense, doesn’t it?

“ACF Fiorentina must announce that goalkeeper Norberto Murara Neto today officially informed the club of his intention not to prolong his contract with the Viola. The decision is definitive” read the official statement from the Italian club. “Neto was keen to make it known that his decision is entirely unrelated to financial motivations, with his desire to be free to decide his own future the sole reason behind his move.”

Now that the Viola have conceded defeat in their attempts to tie the highly rated 25-year old down to a new deal, it’s not likely that he’ll be at the Stadio Artemio Franchi for too much longer — though their bargaining position has been vastly reduced by this recent development. It’s also set a serious clock on any club looking to make a move for him; the winter window may be expensive, but a good ‘keeper is hard to find and Liverpool could face significant competition for the shot-stoppers signature.