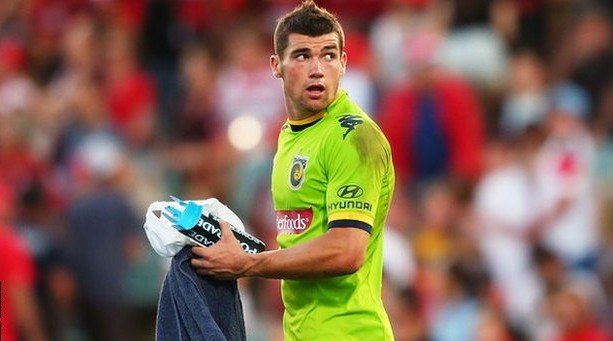 With the transfer window moving into the business end, Liverpool have widened their search for competition for incumbent ‘keeper Simon Mignolet with Belgian side Club Brugge’s 22-year old shot-stopper Mathew Ryan apparently on their radar.

Although the Anfield outfit have been linked with a host of more experienced options, Ryan, who started each of Australia’s three matches at the World Cup, has emerged as a potential target. With a move for Chelsea outcast Petr Cech unrealistic and Liverpool boss Brendan Rodgers waffling on pursuing Fiorentina contract rebel Neto, the up and comer from Sydney could be the one that the Northern Irishman entrusts with giving Mignolet a run for his money.

The former Sunderland man, who only earned a recall to the side after an “indefinite” spell on the bench ended with an injury to understudy Brad Jones, continues to put on a brave face in public despite the Reds much publicized and discussed interest in bringing in other options. They saw a move for former Barcelona man Victor Valdes go up in smoke when fierce rivals Manchester United tied the veteran ‘keeper down to 18-month contract, and now — in typical Liverpool fashion — the club could turn to the relative youth and inexperience of Ryan to help shore up their ailing defense.

Their interest, if there really is any, more than likely won’t come to anything this winter though; not only is the ‘keeper representing his country in the Asian Cup in Australia at the moment, but his new four year contract — signed just this past November — would complicate matters further. If Rodgers is going to bring someone in this month, it’s highly unlikely to be him.