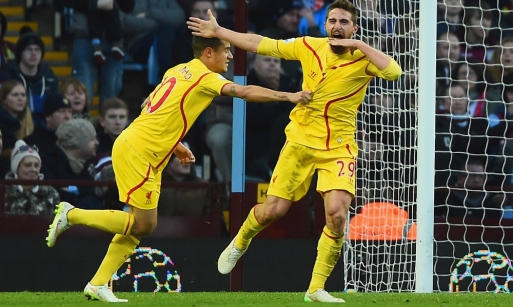 Liverpool were once again plagued by an inability to truly kill the match off, but rare goals from Fabio Borini and Rickie Lambert on either side of the half were more than enough to put their hosts to the sword as the Reds ran out winners in the Midlands.

Much Like last weekend’s trip to Sunderland, Brendan Rodgers side started brightly and were enjoying dictating proceedings when Borini put the visitors ahead with a cool finish from Jordan Henderson’s cross. Villa found thier feet after the break though and when Rickie Lambert put the match out of their reach with a composed finish from the edge of the area, it was only through sheer luck that he was giving them a two goal cushion.

Now, whether that was Paul Lambert’s bad luck or the good luck of the Anfield outfit is up for debate. What isn’t contentious is that his counterpart in Rodgers, who sees his side jump to 7th in the table, will be happy to see his team once again weather a second half blitz to come out on top.

Again, though, it shouldn’t have been as nerve wracking as it was. After Borini nabbed his first of the season, leaning just onside and tucking the ball past Brad Guzan with a fine finish, one would have expected the Reds to run rampant, but Raheem Sterling’s attempt at a clever finish, coupled with the kind of showboating you know that Steven Gerrard — had he been fit enough to make the match-day squad — wouldn’t have put up with, meant that there was enough room for Villa to find their way back into it.

And, of course, they nearly did. With the expected second half slowdown in full effect, the introduction of Andreas Weimann and new-boy Carles Gil produced a serious momentum shift that saw Christian Benteke’s half volley well saved from compatriot Simon Mignolet, Nathan Baker head agonizingly over before the defender found the ball at his feet and the goal at his mercy following a knockdown from the Belgian only for him to miss the ball completely.

While the encouraging build-up play would normally be seen as a positive for a struggling side, the disturbing lack of end product will continue to frustrate those at Villa Park — and that Rickie Lambert would wrap things up tightly with his third goal of the season not long after his introduction will only incur their ire even more as the former Southampton man picked up Sterling’s pass from a half-cleared corner before coolly slotting home.

It wasn’t quite as bad as winning ugly, but there’s no question that it was unconvincing at times. That being said, at the end of the day it’s job very much done as our good run of form continues in earnest and we move up the table. For the time being that’s good enough for me…