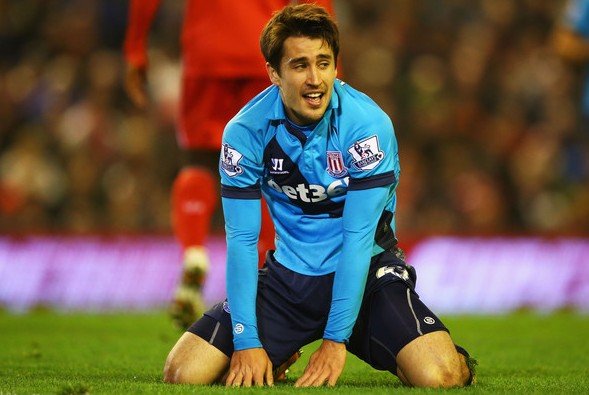 While it seemed like nothing more than just another little piece of fabricated transfer fodder when it first started, Liverpool’s reported interest in Stoke City attacker Bojan Krkic has prompted a stern warning from Potters boss Mark Hughes.

The 24-year old has settled well since moving to the Britannia Stadium over the summer, bagging four goals and an assist so far this term. With a plethora of young attacking midfielders and wingers at his disposal, it’s hard to see exactly where the former Barcelona man might fight in to the Reds set-up and what role he’d have to play, but that, along with Liverpool boss Brendan Rodgers confirming a new deal is on the table for Philippe Coutinho, hasn’t slowed down the rumour mill one bit — much to the chagrin of Hughes.

“Don’t bother,” said the Potters boss when asked about clubs reportedly interested in tempting Krkic away from the Potteries. “He’s done exceptionally well. We knew it would take a little bit of time for him to get to grips with the Premier League and he’s done that. He’s a talented football player and I think he’s proving that in the Premier League” he continued before dismissing rumours of a bid from Liverpool. “I think he’s very happy. We have no intention of encouraging any interest in him. He’s a big part of what we want to do, moving forward, so it’s a non-story.”

Although no real details of the Reds reported interest in the Spaniard have emerged, there’s little doubt that if Stoke were interested in cashing in on Krkic that they’d demand far more than the paltry £1.5mil they paid Barcelona to bring him to the Premier League. With the transfer window winding down and the Potters with little time to secure a replacement, it’d be surprising if this rumour came to anything…