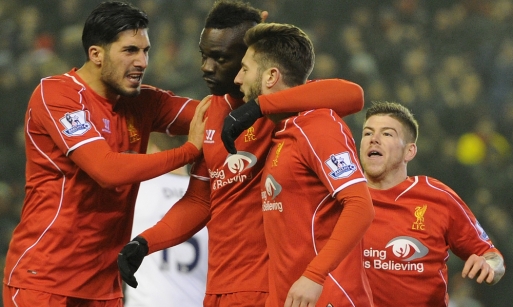 They had to find the lead on three separate occasions, but Liverpool overcame a battling Tottenham Hotspur team who had twice pulled themselves back to level terms to push this one to the end.

The Reds are now within a point of the North London side in the race for Champions League football and have stretched their unbeaten streak at Anfield to an impressive seven matches. Lazar Markovic got the ball rolling a quarter of an hour in with his second league goal of the season only to see man of the moment Harry Kane equalize ten minutes later. Steven Gerrard provided the go ahead from the spot after Danny Rose clattered Daniel Sturridge, but the visitors pulled level when Mousa Dembele bundled in Kane’s cross from a seemingly offside position to set up both a dramatic finale and an unlikely hero.

With primary owner John Henry watching from the stands, Rodgers made some enforced changes to the side that drew with Everton at the weekend with Markovic and Sturridge into the starting eleven to replace Lucas and Raheem Sterling who were both carrying knocks. There were hints in the build-up that the England man could be called upon from the first whistle after coming through cameo appearances against West Ham United and the Toffee’s without incident and though he looked a bit rusty, he’d find himself on the end of more than one good opportunity before the half was out largely on the strength of his own running and Philippe Coutinho’s eye for a pass.

While you wouldn’t have been too far off the mark to have had a punt on Sturridge opening the scoring, he did play a part in it when Markovic capitalized on the 25-year old beating Jan Vertonghen in the air before darting towards goal. Hi shot was a bit tame in the end, but having took a little bobble along the way, it was enough to beat the normally reliable Lloris and give the Serbian — and almost the entirety of Anfield — something to celebrate.

The party only lasted ten minutes though when good interplay on the edge of the area between Erik Lamela and Christian Eriksen ended giving Kane the ball at his feet with Mamadou Sakho, having slipped in the interim, handing him a clear shot at goal. Although Simon Mignolet got something on it, the youngster got enough power on his shot to chalk up his 23-goal of the season in all competitions and pull Mauricio Pochettino’s side level.

Jordon Ibe, once again operating from wing-back, forced Lloris into a good save and Sturridge, if not for the post, would have been on the score-sheet with an inventive back-heel before the half was over, but the 25-year old would be involved in yet another goal when Spurs fullback Rose’s ham-fisted challenge sent him sprawling. After initially waving play on, referee Phil Dowd pointed to the spot after the linesman flagged for the penalty that Gerrard duly converted to bring himself into double figures for the season.

Mignolet somehow tipped over a scorching drive from Lamela not long after to secure himself a place on the highlight-reel, but Spurs came knocking again and after Gerrard was harshly booked for a foul, the Belgian did just as well to keep out Eriksen’s free-kick, but from what looked to be a offside position, Kane found an open Dembele to force the ball home.

Harsh or not, the goal stood and with time wearing down — and Sturridge flagging — Reds boss Brendan Rodgers went for the gusto, replacing Steven Gerrard with Dejan Lovren, bringing on Mario Balotelli and swapping out Markovic with Adam Lallana all in the span of 10-minutes. Pochettino rolled the dice as well, but it was the Northern Irishman who came out on top in the substitution stakes when the former Southampton captain latched on to Ibe’s pass before dancing his way towards net. His low ball across the face of goal was always going to cause problems, but few expected Balotelli to find his way around two defenders to get on the end of it and smash home with seven minutes left to play.

His restrained celebration was followed up with a quick exit down the tunnel at the final whistle, but with three-points in the bag, you won’t hear too many Kopites complain about that — the mystery of Mario is a topic for another day. What will be discussed, at quite some length I imagine, is the Reds pulling themselves to within a point of their visitors and keeping up the pressure on those above them in the race for Champions League football. Don’t play this one down — that was massive.

There’s still a ways to go, but there’s no excuse now not to believe.