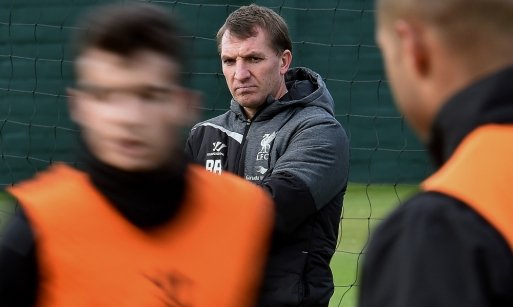 After more or less conceding that Liverpool’s Champions League aspirations are over following Saturday’s embarrassment at the Emirates Stadium, reports began to emerge that Reds boss Brendan Rodgers had a go at a number of senior players in a meeting at Melwood, accusing them of “not playing for him.”

This, of course, was denied by the Northern Irishman. “I’ve heard that this morning. It is something you can’t help. We have lots of meetings here in terms of analysing performance and it was no different to a whole host of meetings we have all year. Those meetings helped us recover from the bad start we had to win 10 games out of 13,” he said as he explained that any reports of a dressing room bust up were fabricated. “It was nothing really; it was just analysing performance, analysing where we are at and then feeding forward to the players. With seven games to go and an FA Cup quarter-final the objectives we can clearly achieve between now and the end of the season. It is just unfortunate something else was made up.”

Although the Liverpool manager would go on to confirm that they haven’t given up completely on finishing in the top four, he hasn’t wavered from the fact that it’s going to be extremely difficult to do. The FA Cup quarter-final replay with Blackburn Rovers on Wednesday will provide a welcome distraction from the Reds wobbles in the league, but with less than ten matches left in the season, the focus will quickly shift back with the goal to win their remaining games already set.

“I have a great bunch of players here who tirelessly every single day give me everything and you can see that in how we play. We might be short in terms of several elements but in terms of the commitment and work ethic that is pretty clear and has been since I’ve been here,” he continued. “Our attitude is to go right to the end. It is going to be difficult for us if the teams above us don’t drop points. We would have to win our seven games but it is certainly something we will go into in order to do that.”