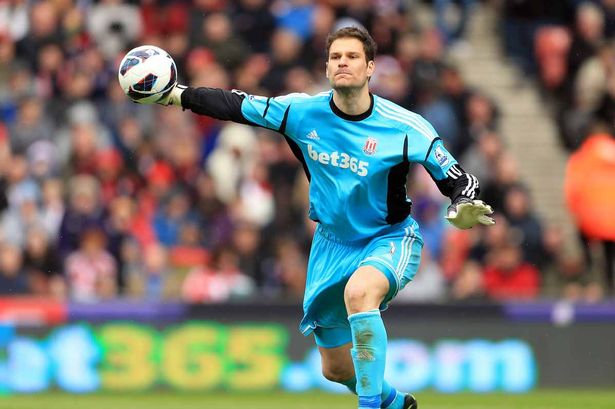 Although Liverpool have been linked with a whole host of ‘keepers as they look to provide both competition and cover for incumbent Simon Mignolet this summer, Stoke City shot-stopper Asmir Begovic is never far from the top of the list.

In the last year of his contract, the 27-year old is being heavily linked with a move away from the Brittania, but boss Mark Hughes wants to avoid that altogether. “My view on it hasn’t changed. I want Asmir to stay here. We can offer him a good option. We feel we are progressing and we want him to be part of that,” the Welsh manager told English media outlet ITV. “We are conscious that he is in the last year of his contract, so we are wary of that. Financial demands will always be part of the discussion, but I don’t think that would be something that would affect anything we would be looking to do with him.”

Arsenal and Manchester United are reportedly also in the frame for the Bosnian’s signature after another impressive year between the sticks at Stoke. His seven clean sheets thus far this season may put him out of contention for the Premier League’s Golden Gloves award, but considering his side are languishing mid-table, that’s a pretty healthy return.

That being said, earlier in the year Begovic talked of his aspirations to play Champions League football, airing his dissatisfaction at always ending up somewhere in the middle of the pack. This, of course, sent a strong signal to both clubs chasing his signature and the Potters to try to sort things out — even if it takes a whole pile of money. “We haven’t had those talks yet but once we do at the end of the season then hopefully we can get a quick and happy resolution,” continued the Stoke boss. “We want Asmir to keep progressing as one of the best goalkeepers in the Premier League here. I am very hopeful of being able to agree something with him and his representatives.”