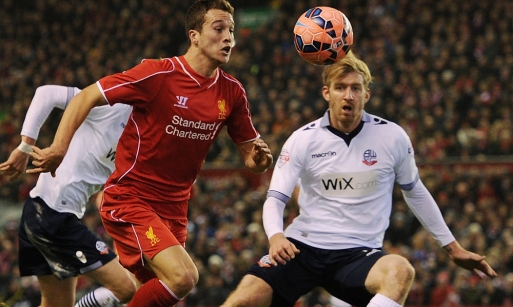 With six new additions to the squad already this summer, Liverpool were going to have to start trimming the fat at some point, and after confirming that Sebastian Coates has made his season long stint with Sunderland permanent, the Reds on-loan Atletico Madrid fullback Javier Manquillo looks to be next on the chopping block.

After arriving from the then Champions League runners-up on a two year loan deal with an eye to a permanent move, the 21-year old started the season with such promise, regularly featuring in Brendan Rodgers starting eleven. By May, the Spanish defender ended up making only 19-appearances for the first team as ended up being used sparingly throughout a disappointing campaign for the Anfield outfit. He popped up only 3-times since the turn of the year and now he looks to be heading out the door with an uncertain future ahead of him.

The signing of Nathaniel Clyne from Southampton yesterday appeared to be the final nail in Manquillo’s coffin with the Spaniard slipping down the pecking order on Merseyside. Andre Wisdom, who spent last season on loan with West Bromwich Albion and only just signed a new four year deal with Liverpool, will be given a chance to impress over the coming campaign and Rodgers expects Jon Flanagan, who once again went under the knife to correct a knee problem, is also in the first team picture.

According to the Guardian, the Reds will need to come to an agreement with both Atletico Madrid and the player himself in order to terminate the deal, and though they haven’t reached that point quite yet, they should reach it sooner rather than later with pre-season training only a week away.