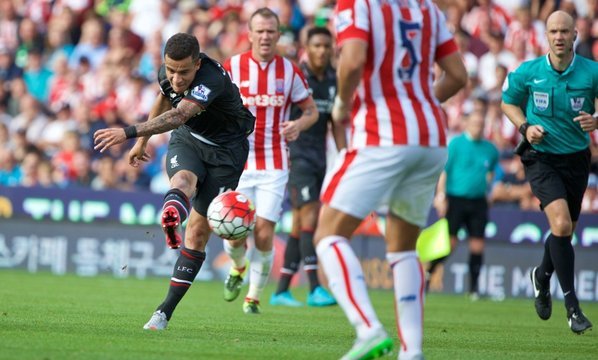 Sometimes you just need your best players to produce, and though he left it late, Liverpool’s Philippe Coutinho was on point with as good as goal as you’re likely to see as the Reds got their Premier League campaign off to a winning start with a narrow win over Stoke City yesterday.

“I obviously saw him do it a few times last year so to do it when he is on my team is nicer,” said former Manchester City man James Milner when asked about the Brazilian’s winner following the final whistle. “That is what the game needed. It was a tough game, it was a battle. I thought we defended really well and it was going to take a moment of brilliance to win the game and we managed to get that.”

While Liverpool hardly put the memories of last season’s spanking at the hands of the Potters to bed with a performance that was disjointed and stuttering at the best of times, keeping a clean sheet and securing three points on the back of a spectacular, late winner against a team that put six goals past you only a few months back is more than anyone could ask for — though Reds ‘keeper Simon Mignolet wasn’t all that surprised when it happened.

“I knew what was going to happen. The moment Philippe got the ball out of his feet I was shouting ‘shoot’. He did the same at Bolton and Blackburn last season,” he told the Liverpool ECHO. “We all knew what was going to happen,” continued the Belgian. “I see that quality from him every day in training. That great talent is something he was born with. He also works his socks off for the team,” he said before adding, “Hopefully we’ll see a lot more of that from him this season.”