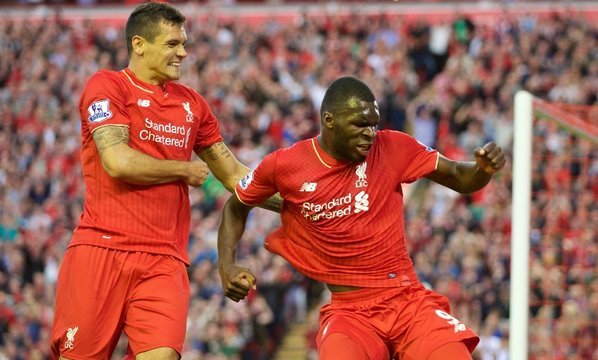 Liverpool made it two Premier League wins on the hop with another unconvincing, uninspired performance, this time against top-flight new comers AFC Bournemouth. Where their victory over Stoke City last weekend came on the heels of a spectacular bit of skill from Philippe Coutinho, the three-points they picked up earlier today arrived under far more controversial circumstances — though the Brazilian played his part in this win as well.

With referee Craig Pawson already turning the travelling Cherries contingent against him after ruling out Tommy Elphick’s early header for what looked to be a rather soft foul on Reds defender Dejan Lovren, if the Man in Black wanted to get back in their good books he did himself no favours by allowing Christian Benteke’s first competitive goal for Liverpool to stand. Coutinho, clearly in an offside position and trying to get on the end of a Jordan Henderson cross at the Kop End before the big Belgian, clearly distracted Bournemouth ‘keeper Artur Boruc before the Aston Villa transplant poked the ball in just before the half-hour to score what would ultimately be the deciding goal.

Considering the change in the offside rule over the summer, you’d be remiss for rolling your eyes at the suggestion that a player who didn’t touch the ball is interfering in play, but the rules now dictate otherwise. “A player in an offside position shall be penalized if he clearly attempts to play a ball which is close to him when this action impacts on an opponent or makes an obvious action which clearly impacts on the ability of an opponent to play the ball.”

Watch it again and it doesn’t matter what tint you have on your spectacles, it’s offside and should have been disallowed. That being said, terrible decisions happen all the time — sometimes in your favour, and sometimes not so much — though this one will remain the main talking point considering it was such a closely contested, hard fought match.

As I said earlier, Liverpool failed to inspire; sticking with the same starting eleven that plodding to victory against the Potters last weekend, Reds boss Brendan Rodgers looked to be sticking with what he believes is his best balanced side despite the extremely positive impacts that both Roberto Firmino and Emre Can had on the cohesion and tempo of play when they were introduced at the Brittania Stadium.

Though both would find their way on to the pitch during the second half — the German for injured captain Jordan Henderson only 7-minutes after the re-start and the Brazilian for Jordon Ibe with 20-minutes left to play — the visitors had already established their grip on proceedings. The Anfield outfit looked dangerously listless at times, passengers in a match they should be dominating in front of their own fans.

Callum Wilson, who scored so many in the Championship last season, refused to be bullied by either Lovren or his partner in Martin Skrtel with the 23-year old caused all kinds of problems in the final third. Max Gradel, a £7mil from Ligue 1 over the summer, also made his presence felt, but it’d be Matt Ritchie who came closest to restoring parity when his low shot shaved an inch or so off the base of the post and team-mate Eunan O’Kane got himself an honourable mention with a tight passing play ending with his effort in the side-netting.

At points you might of been able to forget which one was the newly promoted side as Liverpool, throughout the second half, looked more concerned with surviving than adding to their already slim tally — though Benteke almost did just that in the dying moments only to see his well taken shot slam off the cross-bar. There’s little doubt that a team with far more quality than Bournemouth would have run this tight match even tighter or that on another occasion the Reds could have come up short against the South Coast outfit.

While that’s troubling in itself with an Arsenal side packed with quality just over the horizon, there were a number of positives to take from the match with the Belgian’s contribution being only one. Nathaniel Clyne, who was consistent both going forward as well as defending, looks like a proper fullback and a major upgrade from the downward trajectory of one Glen Johnson over the last could of years. James Milner is looking as industrious and enterprising as ever since his move from Manchester City and Alberto Moreno, though his future remains in question, can still go on a run with his mad dash forward in the final minutes earning the Reds a free-kick in a dangerous area.

That, and of course, another three-points. I’m not about to bang the new players, new leagues and new surroundings drum as the new boys bed in to the side, but there’s an obvious adjustment period going on as evidenced by Roberto Firmino’s quiet cameo appearance and our disturbing lack of bite throughout the 90-minutes. This, hopefully, will change as the matches pile up and the players start to gel — and if we can pick up some points and keep some clean sheets along the way, all the better. No one is going to remember or care how we earned these points come May; well, except maybe Bournemouth.