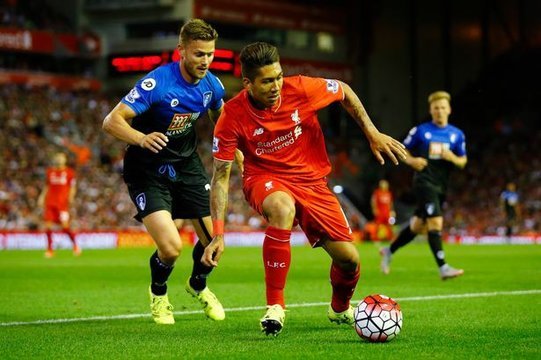 With Liverpool skipper Jordan Henderson likely to miss out on the trip to North London later today with a foot problem, Reds boss Brendan Rodgers could be forced to reshuffle his pack, and though new signing Roberto Firmino looked a bit logey against AFC Bournemouth only a week ago, the Brazilian is keen on making his first start for the Anfield outfit.

“I’m working hard towards that,” said the former Hoffenheim man, speaking ahead of the meeting with the Gunners on Monday. “That is my aim but there’s a healthy competition in the squad right now and the manager knows who should be starting games, so all I can do is keep on working,” he continued, before adding, “I will be ready when I am given the chance to start.”

Rodgers has hinted that the 23-year old is in line for his first spot in the starting eleven, and though it may not come tomorrow, there’s no question that his compatriot in Philippe Coutinho will be out there front and center at the Emirates Stadium — a player that Firmino is not only looking forward to playing with for Liverpool, but with the national team as well.

“It would be hard for anyone to be as good as Ronaldinho or Ronaldo but me and Philippe are going to do our best to get close to them and be the best players we can be for Brazil,” explained the Reds attacker. “It was ugly what happened in the World Cup semi-final against Germany but there are new players in Brazil to turn things around and who can show that Brazil still has lots of talent and opportunities to be successful.”