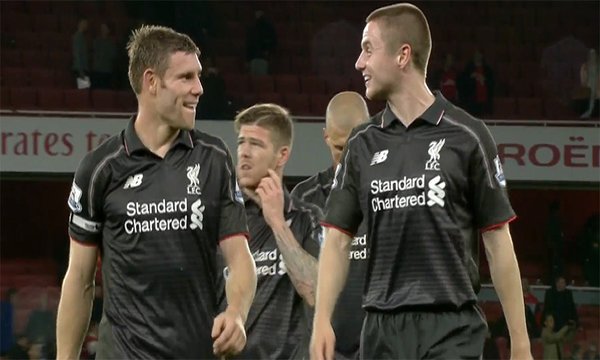 The Traveling Kop weren’t the only ones who were surprised when Liverpool midfielder Jordan Rossiter made his Premier League debut yesterday, replacing Lucas deep into the Reds scoreless draw in North London with the 18-year old not expecting to make an appearance.

“I found out I was travelling down on Sunday. I didn’t expect to be coming on in the last 10 minutes, especially at 0-0. But I was made up, over the moon,” he said of his cameo appearance against Arsenal. “[The manager] called me and said he wanted me to go on for Lucas, with [James] Milner dropping deep and then me pushing on a bit,” explained the youngster. “He said to work hard and enjoy it, and to make sure I kept it tight. We got the result in the end.”

To be fair, Liverpool were better than the result suggests — to be even fairer, both sides were. Hitting the woodwork twice through Philippe Coutinho and seeing a Christian Benteke sitter miraculously saved by Arsenal ‘keeper Petr Cech, the Reds first half display should have earned them the three points. The Gunners, on the hother hand, should have done the same in the second with Olivier Giroud and Alexis Sanchez both coming close to taking the lead. Regardless of the result, the experience for Rossiter will be invaluable as the youngster progresses towards his goal of being a first team regular.

“I don’t know whether it tops my debut goal!” he enthused, following the final whistle. “But it was another great experience and it’s only going to help me in the future. I just need to push on now – it’s all gone, forget about it,” conceded the 18-year old. “Once you get that taste you just want more. But I know I’ve got to be patient. [Jordan] Henderson and [Adam] Lallana were injured and they are going to come back into it,” he added. “But I can only keep on improving every day and hopefully get my chance again.”