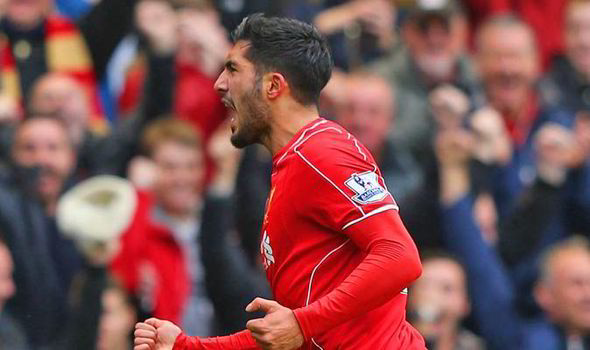 With the international break almost over, the focus is about to shift back to football that matters and Liverpool’s showdown with bitter rivals Manchester United next Saturday remains one of the biggest matches the Premier League has to offer despite neither side being considered genuine title contenders this year. Although both teams have put in a decent start to the season, goals have come at a premium and if either will challenge for the top four, they’re going to have to sort out their problems in front of the net sooner rather than later — which is exactly what Reds midfielder Emre Can is aiming to do.

“I want to do more in attack and I know I can improve in that area of my game. I want to do much more going forward in terms of scoring goals and providing assists,” he told the club’s official website, speaking ahead of the trip to Old Trafford. “I’m trying to bring that into my game and I’m working on it in training,” continued the 21-year old. “I always try to do my best and put in the running and help out in defence. I’m determined to work hard in defence and in attack.”

And after saying that, he lived up to his word, providing an assist for compatriot Thomas Muller as Germany downed Scotland in a tense Euro-2016 qualifier at Hampden Park. Earning his second cap for the World Cup Champions, Can played the whole 90-minutes in a not entirely unfamiliar fullback role as boss Joachim Löw shifted him from his preferred spot in the middle of the park out to the flank. Still learning his trade, the 21-year old is extremely lucky to get the chance to play in a team as packed with talent as Germans are, but he knows that he has to be on the field week in and week out for Liverpool to even be considered for the national side.

“I think every player aims to get in the starting XI so I work hard in training and I always try to show what I can do and impress the manager so he picks me,” explained the Reds midfielder. “At the end of the day I think the competition for places is good for the team. I’m ready to take more responsibility as I’m in my second season,” he said, before adding, “Playing in midfield means you have to take more responsibility. That means I want to score more goals and help the team to get results.”

A result, of course, is exactly what the travelling Kop will be looking for with all three-points almost certain to provide the kind of psychological boost that Liverpool need to get their season back on track after the shocking loss to West Ham United just under a fortnight ago. Can struggled to impose himself against the Hammers and was given the hook at half-time, but on the back of his impressive outings for Germany, his confidence will be riding high going into the trip to Old Trafford — and sometimes that’s all you need to get your focus back.

“I haven’t got a particular target of scoring five or 10 goals. I take one game at a time, said the former Bayer Leverkusen man. “Perhaps I do have one target of scoring more goals than last season and last year I only scored one goal,” he said, reminding the Liverpool faithful of his goal against Chelsea. “Hopefully it will be more this season.”

And, hopefully, he’ll get the ball rolling against Manchester United…