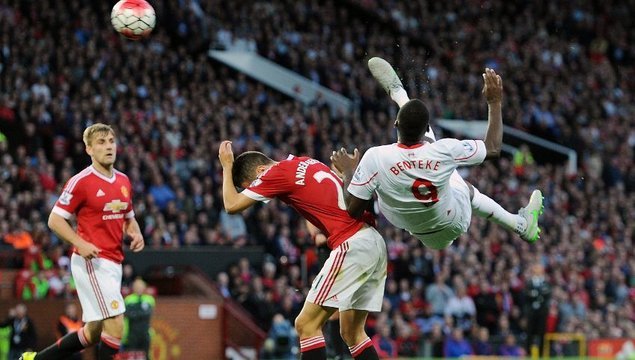 Christian Benteke may have scored a Goal of the Season contender against Manchester United on Saturday, but despite being happy with finding the net for the second time this season, the Liverpool striker was left disappointed with the result as a whole as the Reds crashed to their second defeat on the hop.

“It was just instinct,” said the 24-year old. “I saw the ball come into the box and I just thought I had to try it. I had some luck and I am happy with it but we didn’t get the three points,” he said, reflecting on their poor performance at Old Trafford on the weekend. “For my own confidence it was good to score but I would have rather taken the three points and so I’m disappointed.”

Claiming victory in only four of their last 13-league matches stretching back to last March, the problems at the Anfield outfit have been well documented. Investing heavily in the transfer market over the summer, Liverpool boss Brendan Rodgers attempted to address many of the squads failings that were on show during the previous campaign, but thus far, the players he brought in have yet to gel with the rest of the squad with the lack of both comfort on the ball and composure in the formation huge factors in the Reds slow start to the season.

“It was a disappointment for us. In the first half, we didn’t play well, the second half was a little bit better but in general we didn’t deserve a victory,” conceded the big Belgian. “We have to show more. When you play for a club like Liverpool, you have to show more,” he explained, obviously disappointed with the performance. “That’s what we’re going to do now in training – work hard, work hard and try to play well.”