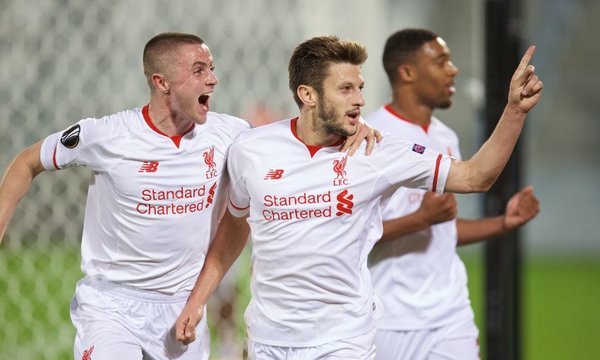 Adam Lallana may have bagged himself a sensational solo goal against French outfit Bordeaux in yesterday’s Europa League opener, but their hosts found an equalizer with just under 10-minutes left to play, leaving the Anfield outfit sharing the spoils where they should have been heading home with maximum points.

“Before the match we might have taken a point, but we’re disappointed. They scored with five or 10 minutes to go,” explained the 26-year old. “A couple of the young lads did really well, Pedro Chirivella when he came on and Jordan Rossiter were brilliant,” enthused Lallana before stressing that it’s time to start taking full points again. “It’s a positive performance. We’ve lost our last two Premier League games and need to get back to winning ways now.”

Conceding six goals in their last two matches, Liverpool looked good for the clean sheet heading into the closing stages of their first outing of the Europa League group stages, but a relative lack of experience in what was a squad stacked with mostly fringe and youth players saw Brazilian striker Jussie restore parity as the clock died down. Lallana, who had opened the scoring just past the hour, was making his first appearance since pulling up with a thigh injury in the win over AFC Bournemouth last month. Although his performance as a whole will draw mixed reviews, when you find the net in a side that is struggling to score goals, you often get left out of the blame game — and make the starting eleven next time out.

“We’ve got a tough game on Sunday against Norwich, so we need another good performance and have to make sure we win,” continued Lallana, looking ahead to Sunday’s meeting with the Canaries. “It’s a point away from home,” he said, reflecting once again on the draw with Bordeaux, but he was quick to recognize that results need to improve quickly if they’re going to put the disappointments of last season behind them. “We need to win our next game in the league and in this competition and then things will look much better.”