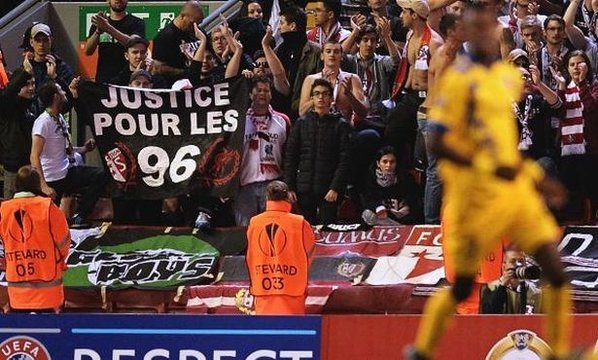 It may have been a bit of a dour draw from Liverpool’s point of view, but it sounded like the FC Sion’s travelling contingent were enjoying themselves at Anfield last night as the Swiss clubs raucous support watched their side not only keep the Merseyside giants at bay, but carve out some impressive opportunities en route to snatching a share of the points and further tighten their grip on top spot in Group B.

Not only were the Sion fans passionate throughout the entire 90-minutes, but they unveiled a banner calling for justice for the 96 Liverpool fans that died during the Hillsborough Stadium Disaster — a classy move that has endeared the Swiss club to Reds supporters around the world.

Adam Lallana gave the hosts an early lead when he capitalized on the good work of Divock Origi to turn in from six yards out, but some silly defending from Nathaniel Clyne and Joe Gomez saw Ebenezer Assifuah finish cooly between the legs of Simon Mignolet after running on to a neat ball over the top of the Liverpool back-line. The draw leaves the Reds trailing the Swiss side in the group which could make the return leg tense on the pitch, but after that gesture of friendship from the travelling support, there certainly won’t be any animosity in the stands.