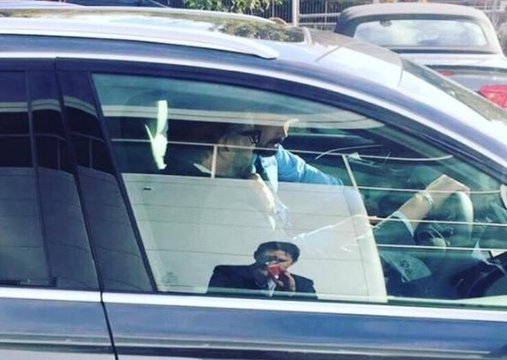 We’ve not about to confirm or deny the validity of this photo, uploaded by Twitter user @ChrisOwens23, but with a number of major media outlets speculating that Liverpool are set to announce the appointment of ex-Borussia Dortmund boss Jurgen Klopp as the successor to Brendan Rodgers tomorrow, the German manager has apparently been snapped on Merseyside picking up an Audi at a local dealership.

Going into a three-year deal with a top English side certainly warrants the purchase of a luxury auto, but whether or not this is actually him remains to be seen. While the club have remained tight lipped over their search for a new manager, sources close to the Reds hierarchy have confirmed that they’d like to make an appointment before Friday.

Rumour has it that talks between Liverpool and Klopp’s representatives have progressed well and that the 48-year old is expected at Anfield tomorrow to tie up any loose ends and put pen to paper on a deal that would see him take over from Rodgers, who was relieved of his duties following the Reds draw with cross-town rivals Everton on Sunday.

That, of course, contrasts sharply with his supposed car buying expedition on Merseyside earlier today. One has to wonder how, exactly, the man would have made it through John Lennon International Airport without being spotted by someone even remotely familiar with football and one of the most sought after managers in Europe. Surely someone would have taken a picture of him on the plane, picking up his bags or getting a taxi before he was spotted splashing some of that new contract money on an Audi?

9 thoughts on “PHOTO: Jurgen Klopp Spotted Buying an Audi in Liverpool Ahead of Merseyside Move?”