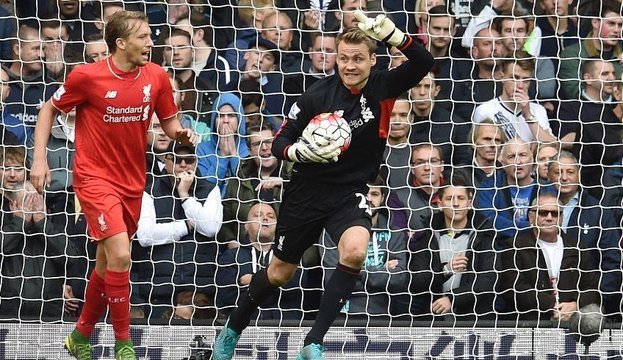 Liverpool ‘keeper Simon Mignolet let new Reds boss Jurgen Klopp know that he’s the man for the job with a string of fine saves as the Belgian backstopped a goalless draw with Tottenham Hotspur to make sure the German manager’s first match in charge of the Anfield outfit didn’t end in disappointment.

That, of course, isn’t the result we’re used to seeing when we travel to White Hart Lane, but for now, it will do with the Merseysiders showing marked improvements in both their intesity and their movement, but unfortunately not enough to get one over on a well organzied and equally as dangerous Spurs side who had the bulk of the opportunities to claim all three-points.

It was a very Klopp formation for Liverpool from the off with the German manger, predictably, employing the 4-2-3-1 that served him so well during his days at Borussia Dortmund and it looked to be working a treat with Emre Can’s partnership with Lucas in the middle of the park giving the visitors a strong jumping off point when building from the back. The Reds are no strangers to scoring in this particular part of North London with our last two trips here yielding 8-goals — and they nearly added another to that impressive tally within the first ten minutes.

Pressing high up the pitch, the hosts were struggling to cope with the energetic Northerners and it was Divock Origi — standing in for Daniel Sturridge who was held back as a precautionary measure after taking a knock in the knee in training on Friday — who came close to capitalizing on a corner, but the Belgian could only smack his header off the crossbar with Tottenham ‘keeper Hugo Lloris well beaten.

Getting a grip on proceedings, Mauricio Pochettino’s men came roaring right back up the other side of the pitch and with their own pressing game forcing Adam Lallana, who looked well suited to Klopp’s all action style, into an error, Mignolet would have to be on point to deny substitute Clinton N’Jie with a save that he really had no business making. Replacing the injured Nacer Chadli early on, the Cameroonian winger took Harry Kane’s diagonal pass first time with the outside of his boot only to be denied by the diving Belgian.

That wouldn’t be the only time the Reds shot-stopper got his side out of hot water with Mignolet getting down low to deny Kane after the England man had been played clean through and he was given some much deserved help on the follow-up when Mamadou Sakho put his body on the line to stop Dele Alli from turning in the rebound in a good position.

As the first half stretched into the second, it was always a matter of a pass being played too far forward or just a touch short as Liverpool’s good interplay failed to reap the kind of rewards it deserved. With both sides racked by injuries, the matched lacked the kind of quality it potentially could have had with creative players such as Christian Eriksen for the hosts and Philippe Coutinho for the visitors given neither the time nor the space to conjure anything of real note.

Origi had another chance that he fired straight at Lloris from a tight angle, Mignolet and Sakho combined once again to keep Kane’s goal drought going and Can, who was only just shaved by his ‘keeper for Man of the Match, fired wide in the dying minutes to cap off a fine display. It would have been finer had he bagged a late winner, but we move on.

Our first clean sheet since the end of August against a Spurs side that aren’t the lightweights we rolled over in this fixture last year isn’t all too bad, is it? Could the Reds under Brendan Rodgers bag the same result? It’s debatable, but it would have been nothing short of a stuttering continuation of an already failed regime rather than a encouraging draw under a boss that has breathed life into a side looking all but devoid of it over the last couple of weeks. Maybe that’s hyperbolic wishful thinking, but I’ll take it — it’s nice to have my pragmatism tempered with positivity that doesn’t have to be forced.