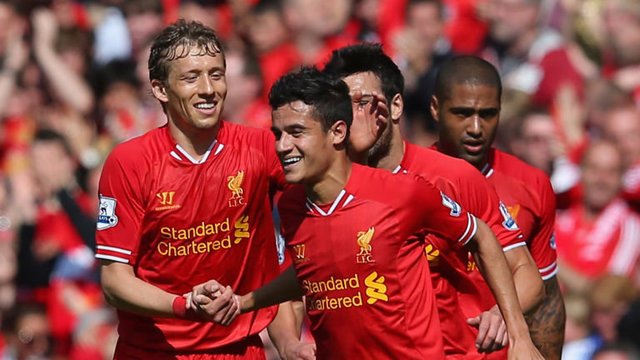 Speculation surrounding Philippe Coutinho’s future at Liverpool is always a good topic of conversation for the media with the Brazilian playmaker having an outstanding season in the famous red shirt. Although there’s been absolutely no indication from anyone around Anfield that the 23-year old will be leaving Merseyside anytime soon, he continues to attract attention from big sides all over Europe.

“I think we can hang on to Coutinho,” said fellow Brazilian and Reds team-mate Lucas when whether or not the midfield maestro would be tempted to move on if the opportunity presented itself. “The one thing I know, he is very happy here,” continued the midfielder. “He was at Inter and it didn’t work for him, but he has found his feet here and he feels that people like him. He considers that important.”

That, of course, isn’t to say that he couldn’t be happy elsewhere. Current Real Madrid boss and known Coutinho admirer Rafa Benitez has apparently been keeping an eye on the Liverpool maestro having utilized his services on numerous occasions when they two were together in at the San Siro. You know that if Los Blancos are interested in someone, fierce rivals Barcelona are keeping an eye on them as well with both Neymar Jr. and former Liverpool striker Luis Suarez speaking highly of the 23-year old — something that has flattered Coutinho, but hasn’t swayed him from wanting to win trophies at Anfield.

“We’re all focused on fighting for trophies and I think we have a great chance in the competitions we’re in,” he told the club’s official website ahead of their League Cup semi-final first leg with Stoke City and the FA Cup third round meeting with Exeter City. “I’m very grateful to the club and now I hope to be able to help the team win trophies,” continued the Brazilian, before adding, “It’s very important to keep battling.”