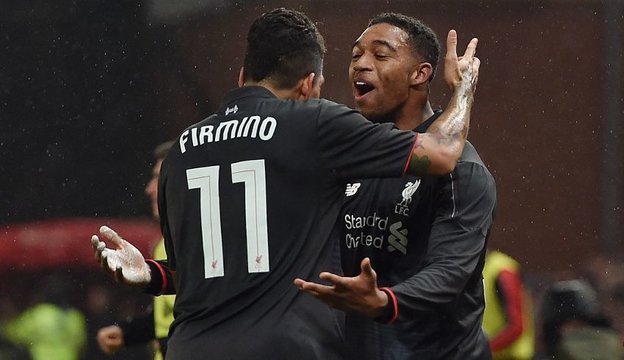 After the shambolic display at Upton Park on the weekend, Liverpool bounced back in a big way, snatching a first leg advantage in their League Cup semi-final meeting with Stoke City at the Britannia Stadium last night on the proverbial cold, wet night.

The visitors got started like gangbusters, penning their host back into their own half while they probed a shaky looking Potters back line for any hint of an opening. Handed a massive blow when Philippe Coutinho pulled up with a hamstring problem within the first 20-minutes, his replacement in Jordon Ibe would insure the Brazilian wouldn’t be missed too much when he played fox in the box, turning a shot past Stoke ‘keeper Jack Butland at the far post following some clever work from Adam Lallana and a mistimed effort from the excellent Joe Allen.

While it may not be the shower of goals we saw in the previous round at Southampton, a lead is a lead no matter how you look at it and Reds boss Jurgen Klopp now has one foot in his first cup final since taking over at Anfield in October — though the German manager isn’t booking the coach to Wembley quite yet.

“If we’d scored one or two goals more then maybe [it would have been perfect]. In this part of the season after the last game, it is always easy to criticise things – you can say we have to make this better, or make that better,” he mused in his post match press conference. “But as a football game with our start, how we continued, how we stood in the game and how we defended first the playing build-up of Stoke, then the long balls, and how smart we were in defensive things, with pressing, coming out and moving – it was really good,” he continued, before doing his best to keep expectations in check. “At 1-0, or even 2-0, nothing is decided in the first leg of a semi-final.”

Liverpool, of course, will be busy right up to the return leg at Anfield in three-weeks time and their workload — coupled with their existing injuries — does not bode well for their chances of securing a spot in the final. Following Coutinho off the pitch, Dejan Lovren was struck down with a similar hamstring ailment just past the half hour, though Lucas filled in admirably for the Croatian defender as he was replaced by James Milner.

While it’s safe to say that the Reds response to the loss to West Ham United was appreciated, much of it came on the back of their hosts being unable to get their mojo working with a front three of Bojan Krkic, Xherdan Shaqiri and Marko Arnautovic creating very little of note with much of that coming on the back of their visitors getting their pressing game spot on.

“People might want to criticise what we did in the first half but sometimes you have to credit the opposition,” said Potters boss Mark Hughes following the final whistle. “They restricted what we wanted to do in terms of getting people around the ball and restricting space and they did that to good effect and we had to improve in the second half,” explained the Welshman. “The key from our point of view is that we didn’t concede again and the danger was that if we over committed and conceded another one that would have been a huge task to go to Anfield and claw it back.”

Much maligned at the weekend, Lucas responded to his critics in kind with a rousing display both in the midfield and when pushed back into defense and Joe Allen, who was making on his 16th appearance of the year, was all over the park in the best possible way; when you play like this, it doesn’t matter if you only score one. That being said, it’s likely to take more than that to secure a spot in the final, but we’ll leave that for the time being — we’ve done it on a wet night in Stoke and that’s the hard part out of the way.