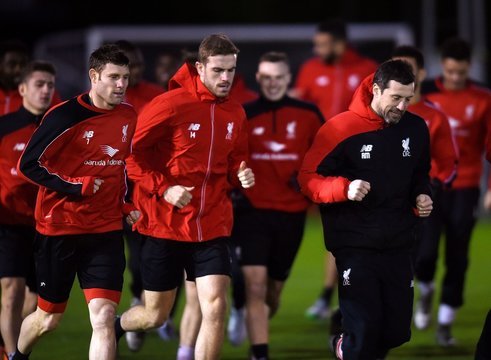 January has been an absolutely brutal month for Liverpool with fixtures galore and the injury list starting to take it’s toll and it’s not about to abate anytime soon with Arsenal visiting Anfield later today and the specter of Manchester United’s trip to Merseyside looming large at the weekend.

Reds boss Jurgen Klopp was forced to field a team packed with kids in their 2-2 draw with Exeter City in the FA Cup last Friday and though the prospect of having to go another round with the League Two side isn’t appealing in the slightest, the hope is that the scant amount of rest afforded to the few first team regulars that aren’t currently sidelined should see them return to the starting eleven ready to face the Gunners.

After failing to impress against the Grecians, it’s likely that Christian Benteke, who was handed the armband, will drop to the bench with the Liverpool manager likely to deploy Roberto Firmino as a false-nine in a similar system that saw both Chelsea and Manchester City fall by the wayside. Of course, they’ll have to do that without the magic quite often afforded to them by Philippe Coutinho with the Brazilian set to spent the next couple of weeks on the treatment table nursing a hamstring problem.

Club captain Jordan Henderson could return to partner Emre Can in the middle of the park while Adam Lallana and Jordon Ibe are expected to flank Firmino up top, but the real question is who plays in the center of the park? In his pre-match presser Klopp said that both Mamadou Sakho and Kolo Toure could be available, but the German manager may very well hand a debut to Queens Park Rangers man Steven Caulker after he made the move to Anfield for the remainder of the season when Southampton cancelled his loan spell by mutual consent.

“We looked for Premier League experience because in this short time, you need that experience. We looked for a good header of the ball because that’s what we need – we want to play good pressing, we want to press the opponent and so they have to play long balls. If they play long balls, you need people in the last line who can help you with headers,” explained Klopp after the 24-year old put pen to paper. “And we’ve found it with Steven Caulker. He was not in the best situation in Southampton, didn’t play too much, but this is January and we want to have the best solution for us and we are absolutely convinced that Steven is the best solution for us,” he continued. “I am looking forward to working with him. He will be here today and then we can start working, so everything is good!”

While much has been made of Liverpool’s injury problems, Arsenal arent’ exactly faring much better. Gunners boss Arsene Wenger has confirmed that Alexis Sanchez, who has been out since November with a hamstring problem, won’t make the trip to Merseyside while midfield trio Santi Cazorla, Francis Coquelin, Jack Wilshere and striker Danny Welbeck remain sidelined with their own respective ailments.

And, in sharp contrast to their hosts, they coped rather well with their absences, winning seven of their last eight matches on the hop — not too shabby for a team that’s made a habit of falling apart during the second half of the season. With that in mind, the fact that the Gunners have only lost two of their last 17 league matches with the Reds makes this task that much more daunting, but Wenger isn’t taking anything for granted.

“Every time we go to Anfield, we face a team who is up for it. It’s always a ferocious battle, no matter who the manager is. They had a very strong manager before, they have a very strong one now and Klopp has the personality to do well there,” said the Frenchman. “We need to play our game at a good pace. We are used to pressing. It is not just Liverpool who do that, everybody in the modern game does it,” he explained. “Pressing has been created in England basically because there is a history of teams who have done that very well so it is part of the modern game to make quick decisions, be very short with your first touch and play your game.”

Keeping the likes of Mesut Özil and Theo Walcott quiet will be a battle in its own respects, but Liverpool have tended to play better this season against teams that don’t just sit back and shut up shop — something that Arsenal aren’t known to do and something they could very well regret come tomorrow evening if the Reds can get their act together.