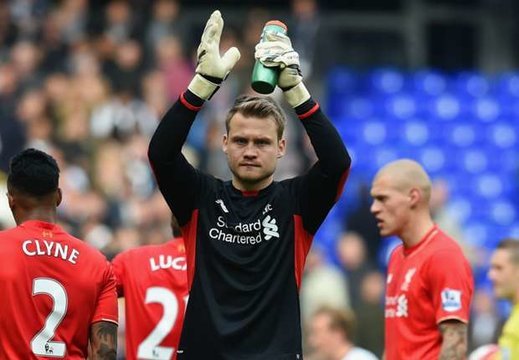 Liverpool ‘keeper Simon Mignolet looks set to sign a new five year contract with the Merseyside giants as the Reds look to not only tie down the Belgian international for the long haul, but put to bed persistent rumours that they’re looking to replace the 27-year old between the sticks.

He may be prone to the odd gaffe or two, but Mignolet has provided a decent backdrop for Liverpool, keeping more clean sheets than any other Premier League ‘keeper throughout 2015, blanking the opposition 16-times. While a number of fans continue to call for boss Jurgen Klopp to bring in an upgrade, the German manager has repeatedly stood by the beleaguered shot-stopper and pooh-pooed rumours that he’s going to make a move for the likes of Barcelona’s Marc-André ter Stegen or Stoke City’s highly rated England man Jack Butland.

“Simon Mignolet is a really, really, really good goalkeeper. Number two in Belgium – or number one we will see – but maybe number two at the European Championships,” said the Reds manager. “It’s a big football country in this moment so he’s had a good education in all parts of life, especially goalkeeping,” he continued. “I spoke a lot with John Achterberg and things like this so we have solutions in our on squad.”

While it might seem like the Anfield outfit is jumping the gun somewhat considering Mignolet still has two years left on his current deal, it’s rumoured that the terms of the extension have been agreed and that the Belgian ‘keeper will put pen to paper on the £50,000 per-week deal by the end of the month.