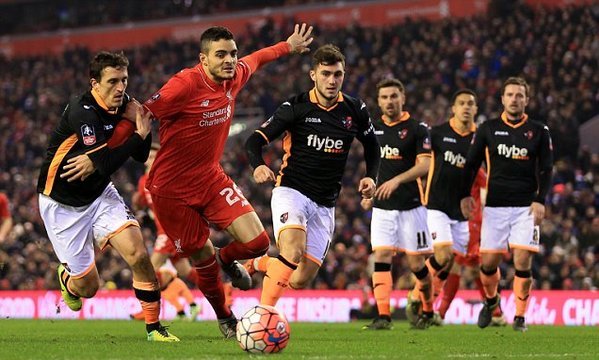 After spending much of the first half of the season injured, Liverpool defender Tiago Ilori failed to get the kind of chance his talent deserves during a loan spell at Aston Villa that ended prematurely. Making his Anfield bow over three-years after he moved to Merseyside in the 3-0 win over Exeter City earlier in the week, the Portuguese defender put in a performance to be proud of, but he’s admitted that he’s struggled to adapt life on loan since making the switch from Portuguese side Sporting Lisbon.

“You always have to look at the positives but even the negatives you can learn from and that is something I try to work hard on every day and not make the same mistake twice; mistakes maybe like, at times, not working as hard as I needed to, just mistakes in general,” explained the Liverpool youngster. “It is not easy [adjusting to loans] but that is part of being a footballer. We have to adapt and do our best,” he continued. “I am not trying to think too far ahead. I am just working hard every day, getting as many minutes as I can and be ready when I am needed to play as there are great players in my position.”

Spells with Spanish side Granada, French outfit Bordeaux and Premier League rivals Aston Villa were supposed to get Ilori prepared for the big stage, but his progression has been somewhat stunted with a lack of playing time and the aforementioned injury restricting his time on the pitch and his chances at first team football. With the Reds currently going through a bit of an injury crisis, the Portuguese defender might be eagerly awaiting getting some more games under his belt, but he’s admitted that he can’t just sit around waiting for an spot in the team to open up.

“I am confident in my own ability. All you can do is work hard and try to show your strengths. I would loved to have had a chance earlier but that is just the way it goes,” mused the 22-year old. “It is obviously mainly my fault because if I don’t show myself in training I won’t get that chance. I can’t wait for injuries, I need to show I am ready,” he added. “There are a lot of arguments but there is no book to say how it should be done. Different players develop in different ways and there is no guarantee in anything,” said Ilori. “I just need to work hard and whether [the future] is here or wherever I’m happy to be back and that’s the most important thing.”