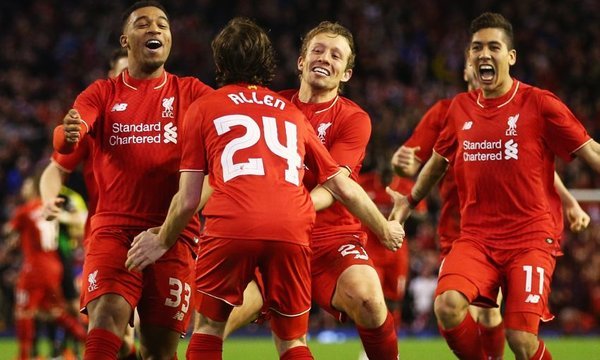 Very little has been done the easy way for Liverpool over the last couple of years and that hasn’t changed one bit since Jurgen Klopp took over in October, but the German manager kept his unbeaten record in semi-finals alive as the Reds squeaked past Stoke City in penalties to book a trip to Wembley.

Jordon Ibe’s strike in the first leg had the Anfield outfit in the driver’s seat until Marko Arnautovic, standing at least a yard offside, leveled proceedings at the end of the opening 45-minutes minutes on Merseyside. It was a bit of a dour affair to be honest with neither side really creating much by way of chances throughout the second period of play and though the hosts remained in the ascendancy throughout extra time, it always looked like a match that would be settled from the spot.

Liverpool ‘keeper Simon Mignolet guessed right to keep out Peter Crouch after Jonathan Walters and Adam Lallana each found the back of the net, but Emre Can rattled the post as the Reds failed to take advantage of the Belgian’s good work. Trading blows back and forth, the 27-year old would be on hand to play hero again as Marc Muniesa, who hadn’t started a match since October, saw his strike saved by the diving goaltender. Some confusion swirled around who was next up for hosts, but there’s be question about the finish as Joe Allen smacked one into the top left hand corner to put Klopp’s side on the road to Wembley.

“I was nervous, there was confusion about who would take the seventh penalty but I picked the right corner and it’s electric here now,” said the Welshman, speaking to Sky Sports after the final whistle. “I think we deserved it,” added Mignolet, very much the hero on a special Anfield evening. “We were the better side over the two legs.”

While the Belgian can certainly make a case for that being true of the first leg, it’d be hard to convince me of that in the second. No matter who you are, to make it to a Cup final you need a bit of luck on your side and despite the clearly offside goal, we ended up having just enough banked to get us through — to be fair though, it shouldn’t have been this hard. With all due credit to the Potters and Mark Hughes, who got the balance in his side spot on, the mere fact that we’ve continued a worrying trend of conceding the first shot on target and that we didn’t trouble Stoke ‘keeper Jack Butland with our own effort until extra-time shows just how close this result was to going the other way.

With that being said, there’s no time for sour-pusses around here.

“It was great, the atmosphere was special. It was a good game for my side against a difficult side to play,” said Liverpool boss Jurgen Klopp. “They changed their style today. It was Butland to Crouch so it was difficult to defend. We had a few problems, but they didn’t have too many opportunities,” explained the German manager. “Their goal was double offside but, in the end, we had luck in the penalty shootout. Over the whole 120 minutes, the players, crowd and Liverpool deserved it,” he enthused, before adding, “Wembley is a cool place to play football… but we go there to win. It’s not much fun to lose.”

No matter who comes out on top tomorrow, it’ll be a distinctly Northwestern affair in the Capital. The prospect of an all Merseyside final looms large with the Reds crosstown rivals in Everton heading into the second leg at Goodison Park with a slender advantage over Manchester City. Having already lifted the League Cup a record 8-times, there’s room for more; can someone make sure we’re well stocked for silver polish?