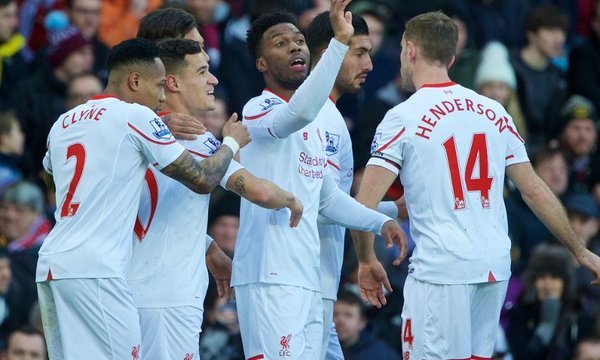 With six different goalscorers on the sheet, Liverpool not only got back to winning ways in spectacular fashion, but got warmed up for their Europa League Round of 32 tie with FC Augsburg on Thursday by smashing Aston Villa at the weekend with the players throwing their shirts into the crowd in celebration at the final whistle.

“I think over the last couple of weeks it has been a hard time and a frustrating time for the fans,” explained Reds captain Jordan Henderson. “The players appreciate that. Thankfully everything (with the tickets) is sorted now,” continued the 25-year old. “The owners realised they made a mistake and changed it back and that is brilliant for the players because everyone can now just focus on winning games,” he continued. “The fans have always been right behind us, so it was just a nice gesture to do with the shirts at the end.”

After exiting the FA Cup under frustrating fashion at the hands of West Ham United and seeing relegation bound Sunderland fight back in the closing stages of the match to secure a draw at Anfield, the demolition of the Villains was a welcome break from the uncertain performances Liverpool have put in as of late. While beating the Midlands outfit hardly signals a complete turnaround in form, Henderson believes that the return of Daniel Sturridge, who opened the scoring at Villa Park, will help the Reds makes things right for the fans.

“Studge makes a huge difference. You can see in the games that he has played how much he has been missed,” said Henderson. “He has been brilliant since he has come back [into] training and is looking really sharp. Hopefully he can continue to stay fit and cause problems when he plays,” enthused the skipper. “Everyone knows how good he is but because he has been out for a while, you do forget the quality he has got and how good he actually is.”