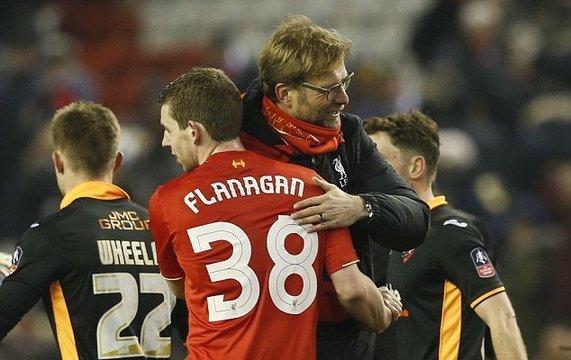 Liverpool will look to get a bit of consistency under their belts when they visit Crystal Palace on Sunday with Reds boss Jurgen Klopp hoping that they’ll be able to build towards a European spot following their win over Manchester City earlier in the week.

“They have been a bogey team for us in recent years,” said Jon Flanagan ahead of the trip to Selhurst Park. “They’ve got the better of us on a few occasions and we need to go and put that right on Sunday,” continued the Merseyside born and bred fullback. “We need to build on that now. We need to get a bit of momentum and get a run together,” he said, before adding, “I think the Champions League is a possibility because everyone keeps dropping points. It’s wide open. We just have to stay focused and keep picking up three points.”

It was only a few months back that Reds boss Jurgen Klopp said he felt “alone” as Anfield emptied with time still left on the clock as the Eagles ran out 2-1 winners on Merseyside, but Flanagan believes that they’ve made great strides under the German boss with the atmosphere against City on Wednesday a testament to just how far he can take them. After putting in an immense performance against the Citizens and keeping former teammate Raheem Sterling at bay, the 23-year old fullback could very well be in line for another start when Liverpool visit South London this weekend.

“I think the manager has brought everyone closer together,” said the defender. “The banner on the Kop the other night said it all: ‘Unity is strength’. The fans were right behind us,” enthused Flanagan. “Jurgen wants to see a never-say-die attitude. He wants us all to be together until that final whistle, explained the lifelong Reds fan. “Everyone believes, everyone has a lot of hope. Jurgen has lifted all the lads and he’s lifted the supporters too.”