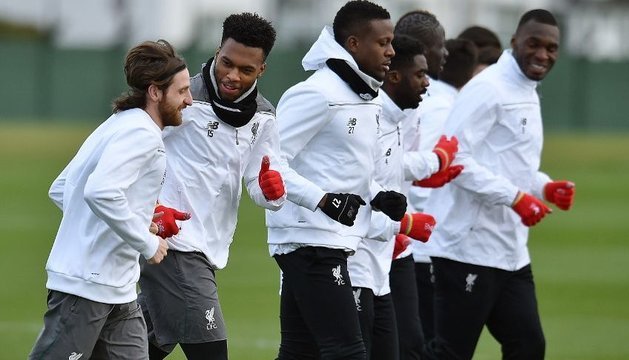 Considering the amount of trophies these two sides have won, you’d think this wouldn’t be the first time that Liverpool and Manchester United will be meeting in European competition, but they’ll take their age old rivalry to a new stage when the first leg of their Round of 16 Europa League tie kicks-off at Anfield later today.

Both mangers have played down the bitterness between the two clubs ahead of the two-legged affair with Red Devils boss Louis van Gaal insisting that we’re “opponents” rather than “enemies” and his counterpart in Jurgen Klopp echoing those sentiments — opinions that are detached a bit from the reality of the matter. Maybe the fact that they won’t be squaring up in the continents most illustrious competition takes the shine off it for the neutral, but if you’re part of either tribe, this could be a children’s charity event with nothing at stake and the only thought in your mind is getting one over on the other side.

Although it’s an near certainty that the Reds will drafted Daniel Sturridge back into the starting eleven after he sat out their last two outings, there have been suggestions that Klopp will hand a starting berth to Christian Benteke after the big Belgian came off the bench to bag the winner against Crystal Palace at the weekend. Nathaniel Clyne will return to the starting eleven in place of Jon Flanagan — who isn’t registered for the Europa League — and Philippe Coutinho should be restored to his rightful place in the three-pronged attack after a fruitful cameo appearance against the Eagles, but the Liverpool boss won’t just be relying on his players to get the job done.

“Everybody needs to be in the best shape in these two legs and the crowd is involved. You know I believe in the influence of the crowd – I try everything to show the crowd and show the people that we do it for ourselves, of course, but not only that because we do it for them especially,” explained the German manager in his pre-match presser. “We really enjoy the relationship with the crowd and it helps, there is absolutely no doubt about it. We can show that we can create a better atmosphere in the first leg than Manchester United in the second leg,” he continued. “It’s very, very important and it can be very decisive for sure. It’s a big part of football – and if it was not a big part, we could play without supporters in the park.”

The enemy is everywhere…

While United boss Louis van Gaal may go into this one sporting a perfect record against Liverpool, it’s going to be a tough go on Merseyside for the Dutchman. Jesse Lingard is ruled out through suspension and Adnan Januzaj is cup-tied after featuring for Borussia Dortmund in an earlier round, but it’s the injuries that will be keeping him up at night with the likes of Wayne Rooney, Bastian Schweinsteiger, Ashley Young, Luke Shaw, and Phil Jones all confined to the treatment table.

Emre Can and Adam Lallana wasted glorious opportunities back in January to hand van Gaal his first taste of defeat in this fixture, but Wayne Rooney was on hand to smash home his first goal at Anfield since 2005 after Marouane Fellaini’s header pinged back off the bar to hand the visitors a narrow victory and complete the double over their Northwest rivals. The Reds Devils boss has a chance to become the only United manager to beat Liverpool five times on the hop, but after losing out to West Bromwich Albion at the weekend, it’s hard to see that coming to fruition. Juan Mata will certainly be looking for a chance to atone for the red card he picked up against the Baggies and Anthony Martial, who scored on his debut against the Anfield outfit, will need to be at his absolute best in what’s sure to be a hostile environment.

We might not be “enemies” according to our respective managers, but if one thing is certain it’s that we’re not friends. There’s always an edge when these two sides meeting regardless of what’s at stake, but with neither looking likely to qualify for the Champions League the old fashioned way, the importance of this competition has been ratcheted up in a big way — and that should only add to the atmosphere. Let’s face it, this might “just” be the Europa League, but if you’re not excited for this one, you might be dead inside.