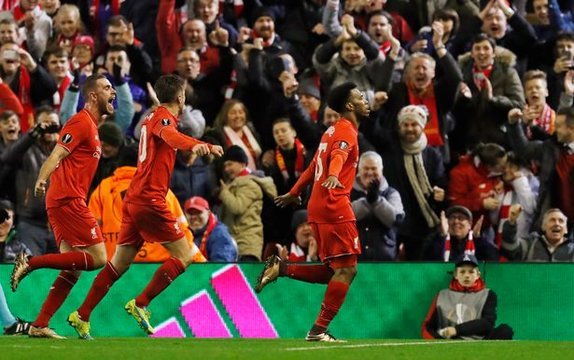 After running out the first leg of their Europa League Round of 16 tie with Manchester United as 2-0 winners, Liverpool striker Daniel Sturridge has insisted that they’ll be looking to keep up the positive, attacking football when they visit Old Trafford for the second leg.

“We’ll approach the second leg exactly the same as we did the first leg. That’s the only way we know,” said the 26-year old hit-man. “The Liverpool way is to win games so we will go into the second leg and be positive,” confirmed Sturridge, eager to let the Reds Devils knows they’re going to try to run up the aggregate score. “The confidence is there within the camp and we are just looking forward to every game. We are mentally prepared for every job we have ahead of us.”

Following the final whistle the injury prone striker insisted that he’s fully fit and ready to play as many minutes as Reds boss Jurgen Klopp is ready to throw his way. Despite spending large swathes of time on the treatment table battling a variety of muscle injuries over the past two years, he has apparently peaked the interest of Serie A side Napoli who have targeted him as a potential replacement for Gonzalo Higuain with the Argentine being widely tipped to leave the Partenopei this summer. With 46-goals in 79-appearances for the Merseyside outfit, it’s easy to see why, but it’s believed that he’d rather add to his ever growing tally with Liverpool rather than make a move away from Anfield — though he knows he’ll have his work cut out for him if he wants to breach the United defense in the return leg.

“De Gea is a world class goalkeeper and sometimes goalkeepers have fantastic games and he seems to be doing it often,” conceded the Birmingham born attacker. He has kept us out a few times, but hopefully next week we will be able to put a few more of the chances away.”