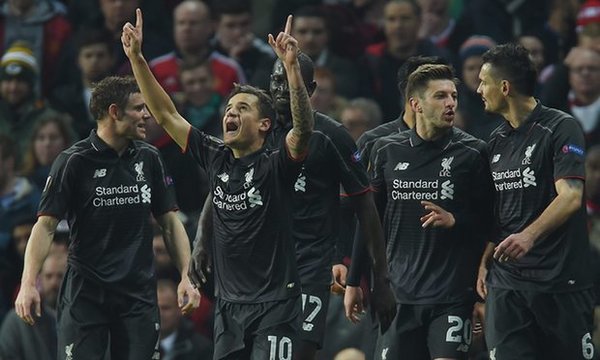 It might have been St. Patrick’s Day, but Liverpool didn’t need any luck to seal a spot in the quarter-finals of the Europa League with Manchester United unable to pull themselves up and find a way back after going two goals behind at Anfield in the first leg.

Anthony Martial ratcheted up the noise levels at Old Trafford when he pulled the hosts within one from the spot after being upended by Nathaniel Clyne midway through the first half, but the hosts were smacked back down to Earth mere seconds before the interval when Philippe Coutinho bamboolzed Guillermo Varela en-route to chipping United ‘keeper David de Gea. With a crucial away goal now in the bag, the Brazilian not only effectively ended this tie as a contest, he made the second half a mere formality.

You’d never expect that to be said of a Manchester United side of years past, but under Louis van Gaal, they’re an entirely different beast altogether — and after losing here earlier in the season, the same can be said about Liverpool under Jurgen Klopp, but in a far more complimentary fashion.

If there were parallels to be drawn between the first meeting and the second, the most important would be that the charismatic German again got his tactics spot on with his Dutch counterpart unable to match either his passion on the touchline or a his taste for the battle on it. Though the Red Devils coped better with the high pressing, high intensity game that worked so well for their visitors a week ago, they still fell well short of the bare minimum it would take to make this a contest again.

In short, United were poor were Liverpool were good and I’m absolutely thrilled by that; Jesse Lingard, Juan Mata and Marouane Fellaini all saw good chances spurned before Martial gave them their moment of belief, but Coutinho — who had talked about how he hoped to bag his first against our bitter rivals in the build-up to this one — was once again the big player for the big game as the Reds silenced what was a noisy Old Trafford.

That, of course, doesn’t even come close to telling the whole story, but it’s still St. Patrick’s Day here and you don’t need me to explain how absolutely immense Mamadou Sakho was or how Sturridge is going to rediscover his goal-scoring prowess once he shakes off a bit more of the rust. You don’t need me to elaborate on how we should have ran the scoreline up or how our inability to do that could come back to haunt us very soon — the Reds are through in Europe at the expense of the one team we always want to beat and that’s all that matters.