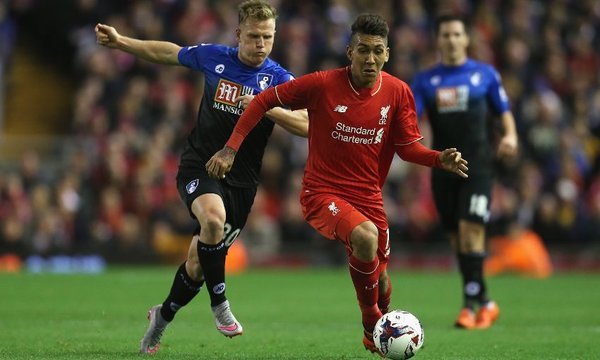 Although his substitution in the closing stages of the 1-1 draw with Manchester United on Thursday looked to be more tactical than anything else, Liverpool attacker Roberto Firmino is set to not only miss the Reds meeting with Southampton tomorrow, but also Brazil’s upcoming international matches.

“The striker Jonas, of Benfica, is summoned for the matches against Uruguay (March 25, at the Arena Pernambuco) and Paraguay (March 29, in the Defensores del Chaco in Asunción),” read a statement on the official website of the Selecao. “Jonas is listed in place of Roberto Firmino.”

The 24-year old, who has been in fine form for the Anfield outfit since the turn of the New Year, was oddly enough originally left out by Brazil boss Dunga only to be drafted into the side when veteran midfielder Kaka was struck down with an injury of his own. With eight goals and four assists in his last 16-outings in the famous red shirt, Firmino has quite rightly shed the “flop” tag that was prematurely attached to him after initially struggling in the Premier League since his big money move from Hoffenheim over the summer.

Just barely in the frame for a four finish, Reds boss Jurgen Klopp will be hoping that whatever is ailing the Brazilian attacker isn’t all too serious. The German manager, who is usually quite upfront about injuries which players are available, did not make mention of Firmino in his pre-match presser, so there’s really no concrete information available regarding what is keeping the 24-year old on the sidelines or how or where the injury was sustained. Hopefully we’ll know a bit more soon and it will be good news…