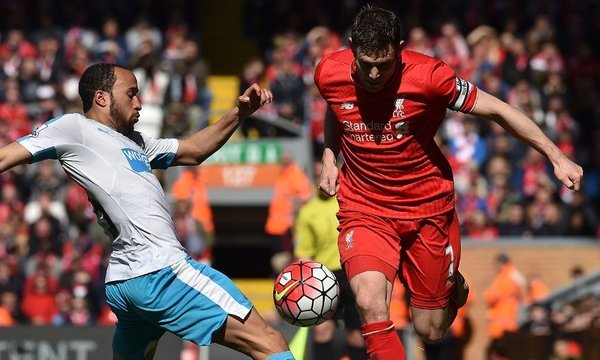 After welcoming former boss Rafa Benitez back to Anfield with a rousing reception, it all looked to have gone wrong for the Spaniard with his Newcastle United side decidedly second best as Liverpool dominated the opening half, but that man loves a comeback and that’s exactly what he got as the Magpies went on to snatch a vital point in the race for Premier League survival.

Daniel Sturridge, looking sharp as ever, opened the scoring just over a minute into the match when he controlled a longball superbly before holding off two defenders enroute to a superb finish past Newcastle ‘keeper Karl Darlow. Adam Lallana would add another before the break with an effort reminiscent of the his best days in a Southampton shirt, a slight shift in tactics and the introduction of Georginio Wijnaldum saw the impetus shift after the restart.

Vernon Anita’s routine cross was massively misjudged by Liverpool ‘keeper Simon Mignolet and the former Sunderland man couldn’t get a punch to it in time as Papiss Cisse headed home his first goal in nine matches to give Benitez’s side a much needed shot in the arm. Looking worn out and vulnerable, it’d be lax defending that would again do them in as Dejan Lovren’s poor headed clearance saw Jack Colback claim his first of the season, seeing his shot deflect off the Croatian defenders foot en-route to the back of the net.

“No, I’m not angry,” stressed Reds boss Jurgen Klopp following the final whistle. “It doesn’t feel like we won a point. It feels like we have lost it. It’s not our best day,” conceded the German manager. “It was an intensive game. Newcastle had two shots and two goals. We had a few more shots and could have scored more goals but didn’t and have to take what we can get.”

Ahead of a crucial Europa League semi-final first leg away to Spanish side Villarreal CF on Thursday, this is not the kind of result that he would have expected. Having won four on the hop in all competitions — including a famous come from behind victory against Borussia Dortmund and an almost routine trouncing of cross-town rivals Everton — sometimes you need a bit of luck to keep a streak going and that was missing for us out on the pitch in the second half.

If Cheick Tiote is flagged for pulling down Sturridge in the box, this one probably turns out different. Had Philippe Coutinho not uncharacteristically shanked a well worked cut-back from Roberto Firmino, there’s no way Anita gets in the way to block. It’s easy to say would of, should of, could of, but it hardly matters now. Maybe it’s the fixture pile-up taking it’s toll and maybe it was the magic touch of Benitez that turned this one around — I’m not about to speculate, but I will say is that we’re going to have to play more than one half of football if we expected to get anything against Villarreal on Thursday.