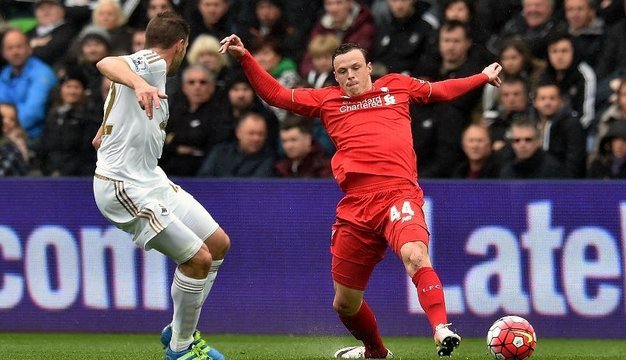 After losing for the first time in the Europa League campaign on Thursday, Liverpool failed to bounce back in Wales when their much changed side was easily brushed aside by Swansea City.

Earlier in the week, Reds boss Jurgen Klopp said that his priority for the summer was to fix the problems still present in the back-line and when an unmarked Andre Ayew headed home from a corner to open the scoring early in the first half, there’d be no better example of the task at hand. Christian Benteke, making his second cameo appearance in as many matches, would cut the deficit in half after Swans midfielder Jack Cork added a second before the break with a swerving effort, but Ayew would capitalize on some poor defending to restore their two goal cushion moments later to put this one out the reach of the visitors.

Liverpool have had success as of late switching up their squad, but after making eight changes to the side that narrowly lost out against Villarreal CF in Spain on Thursday, they were met with a completely different kind of result at the Liberty Stadium.

The young duo of Kevin Stewart and Pedro Chirivella were non-factors in the middle of the park, Jordon Ibe endured a frustrating afternoon trying to conjure something going forward, Brad Smith’s sending off showed just how inexperienced he is and the partnership of Martin Skrtel and Dejan Lovren picked up exactly where it left off — with a display that was as unconvincing as they come. If coming from behind to beat Borussia Dortmund at Anfield was arguably the highest point of the season to date, this outing would make a case for the lowest.

“We didn’t play as good as we could, that’s for sure,” said Klopp following the final whistle. “Our performance was not as a good as possible. With this line-up, we tried to bring fresh legs, fresh mind – that’s what we’ve always tried in the last few weeks in the third game in a week,” explained the Reds manager. “I’m only disappointed or frustrated because I know we could have played better,” he continued, before adding, “In the end, we deserved the defeat and they deserved the win, but a big, big part of this result was our performance. We have to accept this, recover, prepare again and play much better.”

I could say that the Jacks were just as good as we were bad and give the Welsh outfit a big ol’ pat on the back, but if you want to read that you’re in the wrong place. This may have been a young, inexperienced team, but we were hardly a victim of circumstance; yes we’ve played more matches and all that other stuff, but the the boss is right — we should be performing better. With that being said, even if they did, Francesco Guidolin’s side wouldn’t have just rolled over and took it silently. They earned their points today.

If we only had a slim chance of qualifying for any sort of European competition through the league table going in to this one, that window has now well and truly closed. In his pre-match press conference Klopp made it clear where our priorities are and that’s exactly what we saw today — everyone is being primed for Thursday, but this isn’t the kind of momentum we want going in to such a crucial match. The team, the tactics and everything else will be changed of course, but the chinks in our armor are starting to show again and there’s no question whether or not Villarreal were paying close attention.