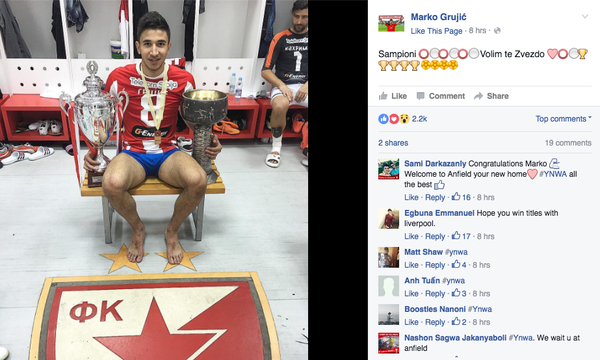 Ahead of making a permanent move to Anfield in the summer, former Red Star Belgrade midfielder Marko Grujic capped off his final appearance for the Serbian club with not only a win, but by winning the league ahead of eternal rivals Partizan. With a whole new challenge waiting for him in England, the 20-year old is excited to hook up with Liverpool boss Jurgen Klopp.

“It was one of the most beautiful days in my life,” said Grujic when asked about signing for Liverpool. “When my representatives told me that I had a call from someone, I didn’t dream that on the other side of the line would be Jurgen Klopp,” reminisced the Serbian midfielder. “At first I was confused a little bit when I saw I had a call from England. How should I feel when I’ve only seen or heard him only on TV until that point? I was both happy and confused,” he said with a smile. “After that it was a big euphoria. It was nice, but but after that I’ve been a little tired after a lot of stories in the media. Now, though, I have signed for one of the biggest clubs in the world and I’m very satisfied. I am living a dream that every boy wants to live.”

With a number of high profile pre-season matches lined up for the summer, Grujic will have a great chance to vye for a starring role in Klopp’s plans for the season — and, almost as importantly, he’ll get acquainted with the Reds fanbase on a personal level.

“I know that Liverpool fans are some of the best fans in the world and one of the most numerous,” said the 20-year old, already well versed with the intensity of the Red Star Belgrade faithful. “Since I signed, they have been very active on Instagram and we’ve been in contact,” explained Grujic. “Players have support from the fans and you can see how much they love the club.”